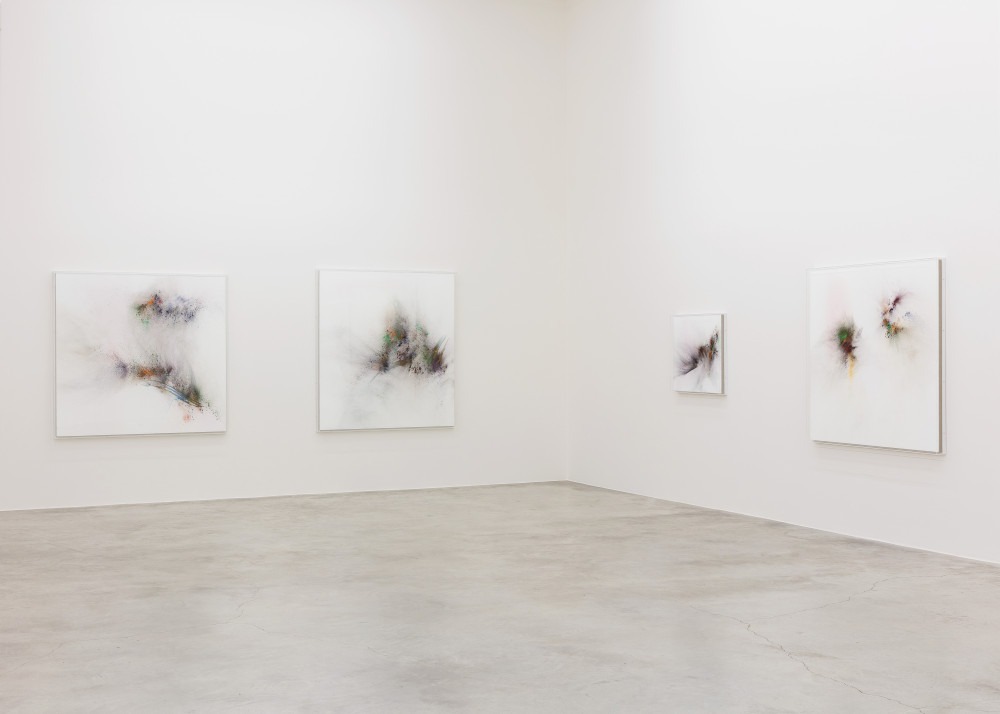 Thilo Heinzmann’s fourth exhibition with the gallery, and his second in Paris is dedicated to the Pigment Paintings, a typology in the artist’s body of work which he invented 25 years ago.

“The paintings of Thilo Heinzmann are at once intuitive and absorbed in the tightness of aesthetic constraint: at once romantic and attuned to modern industrialism, engineering and manufacture. From such hybridization of intent derives their strange ecstasy and their moments of sensory epiphany – a point at which the eroticism of aesthetic science becomes stripped down and chemical: volatility stilled.” (Michael Bracewell, 2013)

His works with pigment, for example, display that powdery dust, they exhibit it in its material concreteness, as one of the many specimens of matter that make up our world; but they also transform it into chromatic fields, exploring its wide yet subtle palette, letting color perform as it should after it has been freed of the burdens of representation.

“In each series, a finely calibrated series of decisions assembles a language that is both experimental and contained. Interest lies precisely in the terrain between control and accident, pre-given parameters and chance. Their urgency, meanwhile, comes from an enquiry that is metaphysical at root. The works describe a translation of thought through materials that develops incrementally, stage by stage, from one body of work to the next.
Heinzmann’s works are analytical, but theirs is a hermetic questioning that concerns itself with intrinsic formal issues: this is not a “networked” painting. He approaches these issues with the eye and the heart of a connoisseur, working towards an understanding of the universal that is formulated in the studio-laboratory, detached from particulars of time and place, as well as extrinsic social, political or economic issues.” (Kirsty Bell, May 2019)

With his new group of paintings on display here, and specially conceived for Paris, Heinzmann brings into play the broad spectrum of possibilities that evolve from this field. Ranging from tender, subtle tones to deep, almost epic extravaganza, each new work suggests an approach to the present moment, as well as it constitutes the desire that conditions painting.