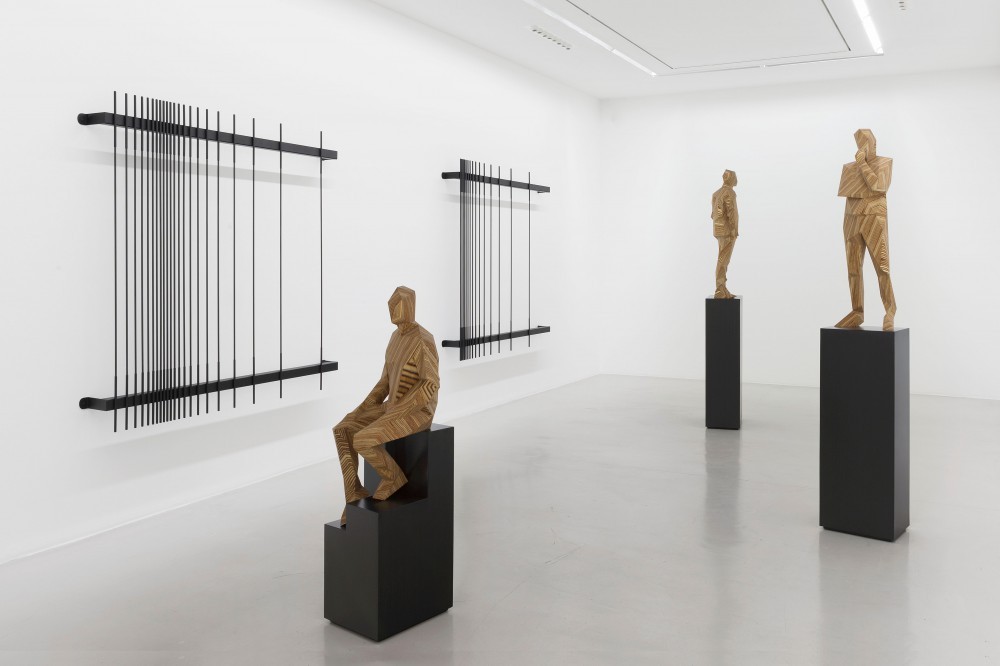 Flying V is a model of electric guitar in the shape of an inverted V with a solid body type (i.e. without a soundboard), that was produced for the first time in 1958 by Gibson and became popular thanks to guitarists like Albert King and Jimi Hendrix.
Source: Wikipedia

The work of Xavier Veilhan is a tribute to the inventions and inventors of modernity, via a formal language that mixes the codes of industry and art. He also nourishes his artistic approach through musical collaborations, notably with the group Air and musician Sébastien Tellier as well as with composer Éliane Radigue. Since May and until the end of November, he transforms the French Pavilion of the 2017 Venice Biennale into “Studio Venezia” a musical installation in which professional musicians from across the world record their work throughout the duration of the biennial.

Pursuing his research into formal and acoustic dynamics, Xavier Veilhan presents a series of works at Perrotin that traces new links between architecture and music, sound and space. Sculptural portraits of three music producers, realized in diverse materials, are presented in particular: Nigel Godrich, Swizz Beatz and Philippe Zdar. They are accompanied by the Rays, lines of carbon extended in space, functioning like transparent grids. They offer a half-presence, like the faceted statues, and evoke the dynamic applied to sound and represented by the Doppler effect: when the sound of an object in motion changes tonality until it fades completely.

Mobile n°4, in the third room, blends into an environment of the same color to become, as well, indistinct, ghostly. Xavier Veilhan explores here the instability of a form subjected to constant changes, fluctuating between appearance and disappearance.

The faceted silhouettes of architects Renzo Piano and Richard Rogers command attention with their size and bright color. Their fading reduction transforms them into silent shadows.

These sculptures are a variation to the two homonymous pieces in the Architects series, created for Xavier Veilhan’s personal exhibition at the Chateau de Versailles in 2009. In October, they will join the collections of the Musée National d’Art Moderne and be permanently installed in the Place Edmond Michelet, across from their iconic creation, the Centre Pompidou, only a few months before the exhibition dedicated to the two architects there.
The works are constructed in stainless steel and painted in tones of green, colors that recall the color code of the building and the time of its construction. Exhibited without pedestals at Perrotin, they will mesure up to five meters high once installed in the public space.
www.galerieperrotin.com