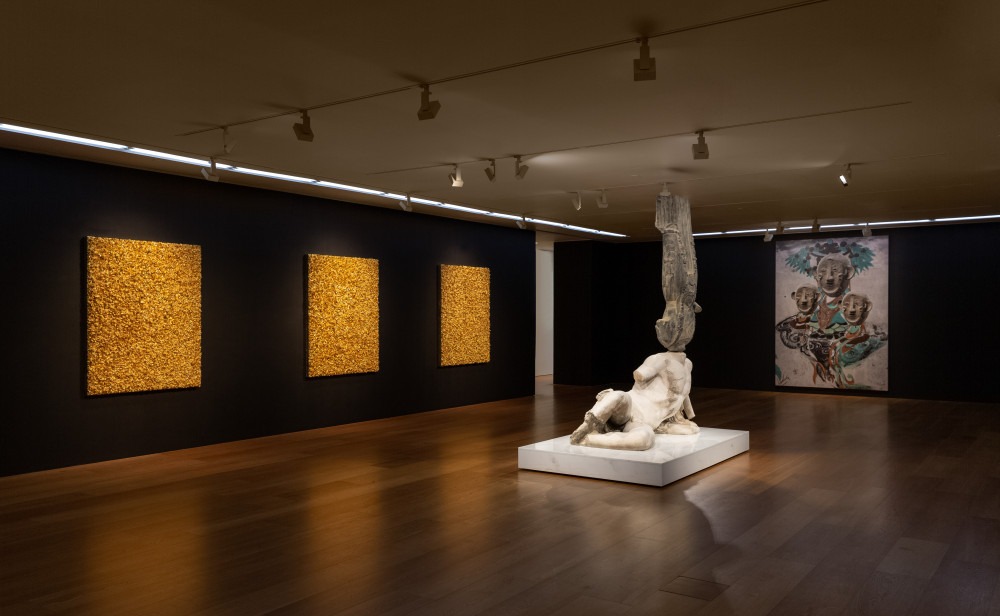 Perrotin Hong Kong is pleased to present the solo exhibition The Glorious by XU ZHEN® from March 25, 2019. It is the artist’s third solo exhibition with the gallery, following Civilization Iteration at Perrotin Paris and a subsequent installment at Perrotin Seoul. This show will feature three of the artist’s signature work series: Under Heaven, Eternity, and Evolution, showcasing a variety of installations, paintings, and sculptures. Since the founding of MadeIn Company in 2009, XU ZHEN® has produced works as a brand, utilizing modern production mechanisms to tackle the current plight of art amidst globalization and capitalization. By juxtaposing classical elements of civilization throughout human history and making them
collide, the artist resuscitates visual experience in everyday life and prevalent symbols of art history, enabling spectators to interpret a host of issues — the value of art, clashes of culture, geopolitics — in a different light.

Under Heaven-Gold, on show in this exhibition, is a brand-new revamp of an existing series, Under Heaven, in which bright-colored pigments are densely and profusely applied onto the canvas using cream piping bags, resulting in baroque-style squiggles and swirls that evoke a carnivalesque revelry in a realm under heaven conjured by the artist. This series has been a familiar sight to many since shown as the visual centerpiece of the 2014 Armory Show in New York. XU ZHEN® consistently employs readily digestible artistic experiences, which take on a satirical function as metaphors for modern society’s excessive consumerism and explore the limits of commodifying art. Revealed in other chromatic installments of the Under Heaven series is the collusion between sensualism and commercialization. This Gold series, despite its use of the most opulent color known to man, irradiates a dignified and profound beauty. The black walls of the exhibition space incarnate Jun’ichirō Tanizaki’s dense shadows; the gold submerges into darkness, but still emits a solemn sheen, even in places where the sun cannot reach. The Glorious, the exhibition’s title, refers to the dazzling glare of Under Heaven-Gold as well as the
accomplishment and wealth symbolized by works of art.

As some of the most representative series of works by XU ZHEN®, Eternity and Evolution follow through an examination of geoculture. Eternity takes inspiration from the headless statues found in China and the West. By reproducing and grafting these statues — symbols of mankind’s triumph — together, the artist provides a new civilizational paradigm for the relationship between violence and the sublime, confrontation and coexistence, and dilapidation and imperishability. The juxtaposition of both regional statues not only alludes to art history and its manmade nomenclature, but also mankind’s colonial past, and within the work, irreconcilable differences appear to gradually crumble and dissipate. The Evolution series develops out of the Eternity series, and although they stem from different spatio-temporal contexts, both exhibit cultural disparity against a global backdrop. Evolution further extends its creative tentacles to primitive art situated on the threshold of mainstream culture, transforming African masks and Dunhuang frescoes into a marvelous blend of cartoon and traditional art. XU ZHEN® thereby lays bare the cognitive transition generated by the Internet, in which the efficiency of hyperlinks and ever-accelerating channels of knowledge acquisition have led to complex and qualitative changes.

The skepticism and ideological trends of post-modernity have long been at the very root of XU ZHEN®’s creative practice. Cultural appropriation and shifting iconographies are recurrent in his oeuvre. With The Glorious, XU ZHEN® provides spectators with various inroads into interpreting our present-day culture and social plight. Amidst circumstances where chaos is rampant, the artist’s works have a unique way of bringing to light the underlying swells of possibility. Stele sculptures conjuring the Tower of Babel; paintings refracting a bizarre, visionary aesthetic; the gloriously resplendent realm under heaven: these inspirations not only reveal a lofty ambition of leading art into the future, but also serve to condensate ancient oriental wisdoms.