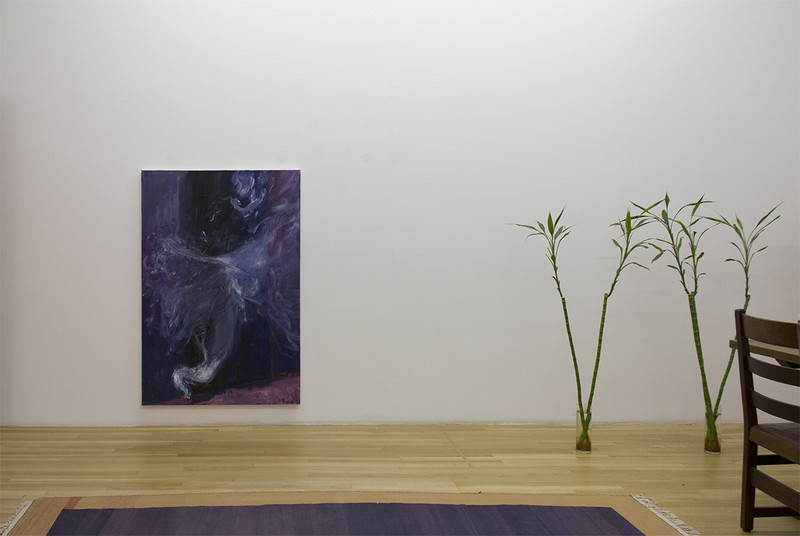 Peter Blum is pleased to announce a three-person exhibition of new works by Graham Durward, Irina Rozovsky, and Roger White. Exalted Position will be on view at Peter Blum Gallery, 20 West 57th Street, New York from June 30 through September 2, 2016. There will be an opening reception on Thursday, June 30, from 6 to 8 pm.

The paintings and photographs in this exhibition depict objects and scenes from everyday life: an arrangement of silk flowers, a reflection of a wall in a hallway mirror, incense smoke in the corner of a room, a tree stump, a motorcyclist standing on a desolate road. Exalted Position suggests that something can be made or designated as “important”—that an object or place can rise above its material status into the realm of the spiritual or the symbolic. Through their works, the artists in this exhibition offer entry points into the possibility of gleaning transcendent meaning out of mundane and ordinary moments.

Graham Durward will present a group of paintings from several evolving bodies of work; from semiabstract renderings of burning incense to densely saturated depictions of harlequin patterns. Durward’s loose brushwork pushes and pulls the surfaces of his paintings between abstraction and representation, always slipping away from straightforward definitions. Depictions of smoke melt into swirling abstract fields while geometric abstractions reverberate with a sense of absence and immateriality.

Irina Rozovsky’s series A Rock that Floats conveys a heavy, nearly mystical encounter with the everyday American landscape. These photographs were made with a portable film camera over various road trips through the United States between 2013-15. Rozovsky has recently printed the work in the color darkroom— an analog and nearly extinct method of making color prints that allows for a subtle shifting of hues away from faithful depictions and casts the images in the shadow of memories and illusion.

Roger White’s paintings delve into the iconography of the mundane. In this exhibition White will present a group of new paintings that depict household objects and settings. Each work is an abstraction or fragmentation of the subjective experience of looking, in which the vantage point of the artists is perpetually challenged, questioned, or reaffirmed. The works come across both as a measured analysis of discrete objects and a poetic meditation on the practice of daily life.
www.peterblumgallery.com