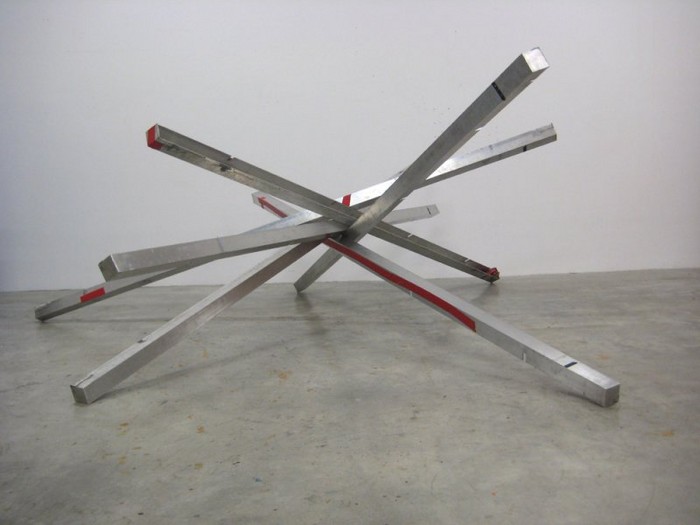 The exhibition focuses on new sculpture and works on paper, which examine the fabrication and manipulation of objects to create abstract works. Building sculptures out of a variety of components, Beech edits the objects’ original intention and requires the viewer to engage with its formal properties of shape, form and scale. For example, Silver Container, 2010 a large L-shaped platform is placed onto casters and painted with metallic paint. The fabrication of the sculpture recalls shipping containers however the brushstrokes and texture of the applied paint give the work a painterly quality. In other works, commonly found materials such as glue bottles, work gloves and dried paint are incorporated into sculptures and elevated to art-objects.

The above examples of Beech’s work illustrate the artist’s references to 1960s minimalism, specifically the transformation of ready-made objects. The work of Donald Judd, Carl Andre and John Chamberlain come to mind, but also other twentieth century sculptors are playfully referenced. However, it is Beech’s humor and irreverence in reference to these artists, which gives focus to his own individual work. In Make, 2010, applied stripes of red duct tape and marker offset the sleekness the large beams of silver aluminum and call attention to the artistic process referenced in its title. These ideas are continued in a series of over life size photographs of urban and industrial environments which Beech has edited using silver industrial tape. In several of the works, almost the entire photograph has been covered creating blocks of deleted information and leaving behind only the suggestion of its original image.

John Beech was born in Winchester, England in 1964. He lives and works in Brooklyn, New York. Awards include the Pollock-Krasner Foundation Award in 1999 and the Chinati Foundation Residency in 1998. His work has been exhibited nationally and internationally including a one-person exhibition at the Stiftung für Konkrete Kunst in Reutlingen, Germany and group shows at The Aldrich Contemporary Art Museum, Ridgefield, Connecticut; Albright-Knox Art Gallery, Buffalo, NY; University Art Museum, Berkeley, CA; San Francisco Museum of Modern Art, San Francisco, CA; The Smart Museum of Art, Chicago, Illinois; and the Sculpture Center, New York, NY.
www.peterblumgallery.com