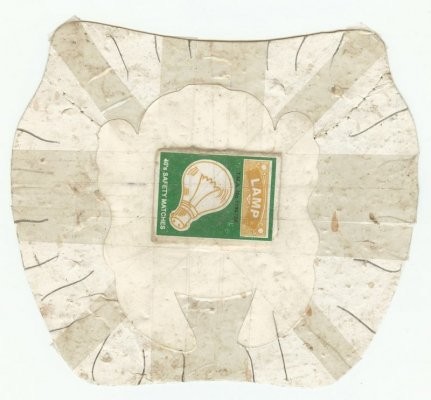 On view are India collages from 2008 and recent large-scale paintings. Beech often plays with creating new unanticipated works from everyday materials, questioning function and focusing on their intrinsic beauty or design, creating something new and timeless out of what at first sight seems mundane. This new body of work highlights Beech’s interest in the inventive and resourceful use of materials that is so common in India.

The India collages, created during Beech’s travels in 2008 in Delhi, Agra, Jaipur, Udaipur, Jaisamer, and Diu, India, consist of various found materials such as packing material for candy, hotel soap, or covers of children’s school note books, taped together and painted over using locally obtained ink or paint. The Indian texts, patterns and colors give the work an exotic, otherworldly feel. Beech assigns these ordinary materials a different significance by re-contextualizing their meaning and elevating them to an art object.

The recent large-scale paintings provide a further exploration of Beech’s travels in India and offer a minimalist interpretation of the lyrical texts and patterns of the country. These works consist of vertical panels made from large pieces of Plexiglas patched together and mounted on an aluminum structure. Paint is then applied covering the surface on both sides giving the paintings a third dimension. The gestural quality of Beech’s brushstrokes has a relation to handwriting, in particular the flow of the Urdu script as well as to Mughal and Hindu architecture.

On the occasion of this exhibition Peter Blum Edition published the book The Space Surrounding, including photographs, collages and notes from John Beech’s travels in India in 1990 and 2008.

John Beech was born in Winchester, England in 1964. He lives and works in Brooklyn, New York. He graduated in 1986 from the University of California, Berkeley; CA. Awards include the Pollock-Krasner Foundation Award in 1999 and the Chinati Foundation Residency in 1998. His work has been exhibited nationally and internationally including a one-person exhibition at the Stiftung für Konkrete Kunst in Reutlingen, Germany; Albright-Knox Art Gallery, Buffalo, NY; Portland Art Museum, Oregon, WA and group shows at The Aldrich Contemporary Art Museum, Ridgefield, Connecticut; University Art Museum, Berkeley, CA; San Francisco Museum of Modern Art, San Francisco, CA; The Smart Museum of Art, Chicago, IL; and the Sculpture Center, New York, NY.
www.peterblumgallery.com