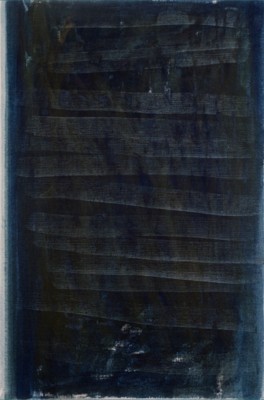 I have left aside all theories and kept this as my only doctrine:
one is never exact enough, simple enough, deep enough.
- Ivan Aguйli (Swedish painter, 1869 - 1917)

There will be an opening reception on Thursday, March 29, from 6 to 8 p.m. This exhibition is John Zurier's first solo exhibition at Peter Blum Gallery, and will present works from 2001 to present.

John Zurier's paintings have been described as part of a new generation of painterly abstraction that transcends the gestural and material to evoke the emotional. Process and material are critical aspects of Zurier's works. He mindfully reveals the particular texture of the canvas or linen with its often rough and uneven weave. Furthermore, the evidence of the stretcher bars, and the tacking and folding of the material at the sides and corners, all reinforce each painting's physical qualities.

The evident brushwork and blending of monochrome color give Zurier's paintings an ethereal quality. Although his works share affinities with those of Ryman and Newman, Zurier also cites influences as broadly ranging from Watteau to Malevich. These interests are evident in the painterly way in which he builds layers of color, his attention to surface modulation, and the reductive character of the work. Zurier manipulates the flat surface with active brushstrokes, at times leaving the canvas revealed, at other times hiding it beneath a thick impasto-acts that simultaneously acknowledge the materiality of both the paint and canvas. Furthermore, the subtle layering of color builds and dissolves form, whether translucent or opaque, suggesting a sense of light, movement, and depth.