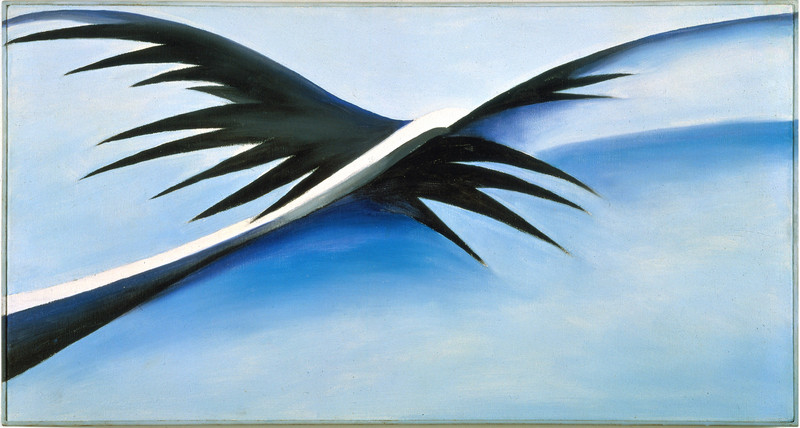 The exhibition features works of indigenous peoples from the Southwest region of the United States of America that illustrate their strong and often neglected influence on Modern and Contemporary art.

Funerary vessels, paintings, pottery, weavings, and baskets from fourteen tribes including the Apache, Hopi, Mimbres, Navajo, and Zuni are exhibited alongside Modern and Contemporary works by artists such as Josef Albers, Max Ernst, Agnes Martin, Georgia O’Keeffe and Jackson Pollock (see complete list below), illustrating the profound inspiration these artists found in the desert landscapes and Native American cultures of the Southwest.

Iconic photographs by Ansel Adams, Edward Curtis, Sumner Matteson, Paul Strand and Adam Clark Vroman are on view as well, providing both a historical and geographical framework for the objects and artworks.

Also on display is the full six-volume set of the legendary publication, Historical and Statistical Information, Respecting the History, Conditions and Prospects of the Indian Tribes of the United States by Henry Rowe Schoolcraft published between 1847 and 1857. Additionally, a selection of important mid-nineteenth century books by George Catlin and illustrations by Karl Bodmer, which were among the first publications to illustrate and document Native American life give further insight and reference.

Contemporary artists Andrea Geyer/Simon J. Ortiz and Nicholas Galanin offer reflection on the social and political significance of the Native American peoples and how these factors have shaped their artwork.

Works by the following tribes and artists are included in the exhibition:

On the occasion of the exhibition, Peter Blum Edition has published the book, Kindred Spirits, Native American Influences on 20th Century Art. This hardcover book includes 118 illustrations of all of the works in the exhibition and features texts by the poet and art critic Carter Ratcliff, and Comanche author, essayist and curator at the Smithsonian’s National Museum of the American Indian, Paul Chaat Smith.

In context of the exhibition, a series of discussions will take place at Peter Blum Soho, 99 Wooster Street, NY:
Nicholas Galanin will give a presentation on Tuesday, November 1st at 6:30 pm.
A poetry reading and discussion by Simon J. Ortiz will take place on Thursday, December 15th at 6:30 pm.