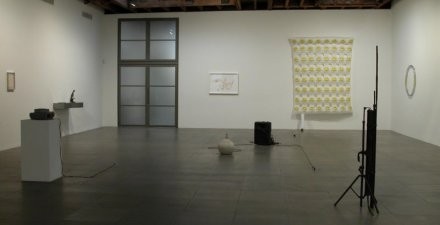 Short Circuits, organized in collaboration with Johann König, Berlin, comprises a group of seven European artists. The artists included present a significant direction of an emerging generation. They share the belief that their artistic transformations usurp traditional understandings of how things and ideas function in a society mediated by representations.

Tatiana Trouvé’s (born 1968 in Italy) sculptures and two-dimensional works are an exploration of matter, form and memory. By transforming the inherent material quality of an everyday object and by altering its scale, she creates disorienting spatial relationships. Michael Sailstorfer’s (born 1979 in Germany) sculptural interventions instill life into profane objects, altering both their function and value. He uses found objects as a starting point, and by removing them from their usual context radically manipulates their physicality. Annette Kelm (born 1975 in Germany) operates this transformation in her photographs of objects by isolating and staging them. In her work she raises the question of what combinations of objects are imaginable and/or have so far not been imagined? These surprising combinations of objects within a single work hinder simple interpretations and categorizations. The complex iconography of Manuel Graf's (born 1978 in Germany) video installation is drawn from a great fascination for architecture, pop, fashion, and the related theoretical discourse. His video works, frequently accompanied by objects, are deeply permeated by historical references and allusions. Micol Assaël’s (born 1979 in Italy) drawings are a playful interpretation of hermetic power systems based upon her interests in mathematics, physics, and philosophy. Assaël’s work often plays with the human body’s possibilities of sensory perception. This investigation in science is extended by Natascha Sadr Haghighian’s (see bioswop.net.) interrogation of the premises of scientific knowledge. Her projects originate from a series of queries about systems of representation and questions how perception and identity are conveyed. Exchange and debate are key elements in her artistic practice. Tue Greenfort (born 1973 in Denmark) projects are characterized by an interdisciplinary openness and quasi-scientific working methods, which reveal his extensive research. He is developing an artistic system that illuminates the interlocking effects of human activity and changes in our environment, establishing connections between these issues and conceptual art.
www.peterblumgallery.com