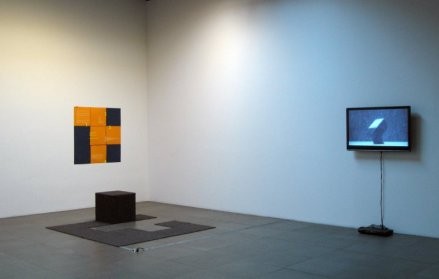 Exhibition View
SOME THING ELSE

Some Thing Else features six New York-based artists who probe the definitions of an art object by expanding its vocabulary with music, text, video, and performance. The formal issues explored in these works build a platform for unexpected narratives and compositional variations. These gestures open up the function and meaning of sculpture, while also creating a context for reconsidering the visual and conceptual possibilities of formalist objects.
Julien Bismuth works in the space between visual art and literature. In Specific Object, Bismuth combines a cut felt carpet and an empty pedestal, from which plays an audio recording of a text written by the artist. The viewer is invited to become part of the sculpture by sitting on either the carpet or the base, while listening to the text—a multi-layered description that encircles different qualities of the object itself. This fictitious description animates the object but also raises complex questions about how one should name a work of art.
In Sculpture Park, Erin Shirreff is interested in the experiential and durational difference between looking at a sculpture and looking at a video. Over the course of 11 minutes, four models of Tony Smith sculptures (i.e. Spitball, Amaryllis) slowly emerge from a black screen. The pixilation of the digital image gives way to fake falling snow, which gradually defines and makes visible the outlines of the sculpture. The result is a hybrid between video and sculpture that makes viewers aware of their own perceptual assumptions.
David Adamo’s installation Untitled (Margret) consists of a stage-like platform on which an empty violin case, two stripped socks, and squashed tomatoes cast in bronze sit forlornly. This composition is contrasted with a group of sledgehammers with most of their handles hacked away, leaning against the wall. This metaphorical setting alludes to the absence of a performance and the performer, emphasizing a durational quality only present in the interpretation of the work.
Mika Tajima integrates a range of disciplines into her artistic practice: sculpture, painting, music, performance, graphic design, and architecture. Her installation here comprises double-sided silkscreen paintings mounted on plywood and set on wheels, with a loop of images of past performances (often with her minimal noise band New Humans) projected on one of the panels from a slide projector. These movable modular architectural structures (their color and pattern drawn from late 1960s design) reference sound barriers in recording studios and allow for a synergetic flexibility in the installation.
Charles Goldman is invested in what he calls “concretized experience.” In 24/24/24/24, he explores distance and time as containers for individual experiences. The sculpture consists of four 24 feet “distance paintings” (exactly 24 feet of paint was used in the creation of each) and a fiberglass object resembling a natural rock that in fact contains a speaker playing four different ambient sound pieces, each six minutes in duration and adding up to 24 minutes total.
The starting point for Nin Brudermann's installation is a functional garment—a body suit that she invented and for which she holds the Austrian patent. This ready-made object provides the framework for investigating the absurdities of governmental patent language as well as the theatrical and practical permutations of the object itself. A live performance featuring the body suit will take place during the opening on June 19 from 6 to 8 p.m.
www.peterblumgallery.com