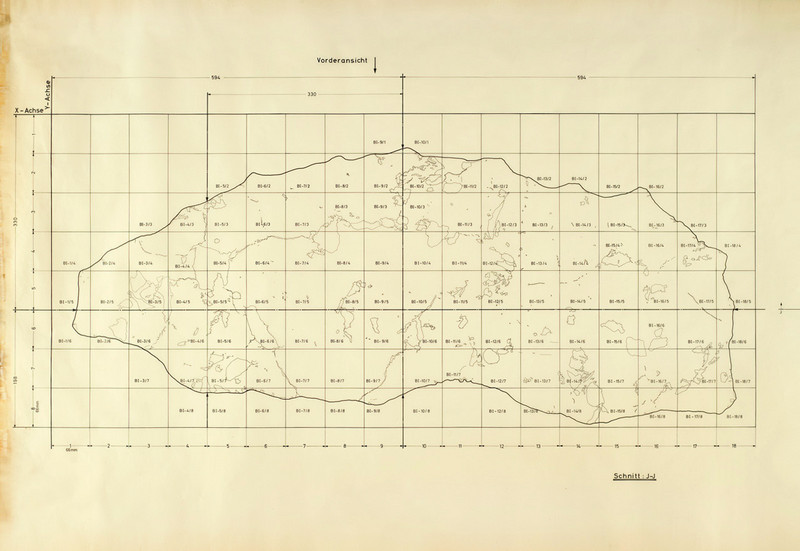 Peter Blum is pleased to announce a summer group exhibition entitled Traces at 20 West 57th Street, New York. There will be an opening reception on Thursday, May 29th from 6 to 8 p.m. The exhibition runs through August 1st.
For the exhibition, John Beech (born 1964 in England) will feature a new group of dumpster drawings. Beech is interested in fusing the visual vocabulary of abstraction with ordinary objects, which are elevated to the status of art, creating a dialogue between high and low culture. Huma Bhabha (born 1962 in Pakistan) has gained widespread recognition for her raw, sculptural forms, which evoke primeval, ritualistic personages or post-apocalyptic inhabitants of a world gone awry. Constructed from such humble materials as air-dried clay, wire, mud, Styrofoam, studs, and scavenged wood, her work explores the fertile ground where the amorphous and the material collide. Tacita Dean (born 1965 in England) utilizes a variety of media including drawing, photography, and film. The Russian Ending, a portfolio of 20 photogravures, is based on postcards collected over several years for their apocalyptic images. Dean uses these images to create a final scene in an imagined film. The work of Guillermo Faivovich (born 1977 in Argentina) and Nicolás Goldberg (born 1978 in France) incorporates both artistic and scientific pursuits. El Taco, a two ton meteorite, landed in a crater field called “Campo del Cielo” in Northern Argentina around 2,000 BC. The two have conducted extensive research on the meteorite’s discovery which has led to an artistic examination, reconstruction, and reinterpretation of the records related to this event. In the triptych Intention/Automation, Jonathan Marshall (born 1981 in the United States) explores and attempts to understand the difference between free will and the automatic processes of the body. Marshall’s paintings often emphasize themes such as spirituality, human motivations, and the universe that are then filtered through his own unique lens. The resulting work is an artifact of both a personal and universal journey. Isabel Nolan’s (born 1974 in Ireland) work evolves out of an intensive investigation of cosmological and botanical phenomena. Her work recognizes our need to define our situation and our relationships with others, as well as our desire to understand ‘everything’ from our inner lives to the natural world. Nolan attempts to account for the enduring strangeness of the world, even in its most intimately familiar forms. Nam June Paik (born 1932 in Korea) is considered to be the founder of video art and coined the term “electronic highway.” Paik has had a profound impact on the way we view media culture and its influence on our daily lives. The artist has shifted and expanded the definitions and languages of art making. In the works of Luisa Rabbia (born 1970 in Italy) the passage of time, along with the inherent loss and change that is associated with it, are recurrent themes. Featured in the exhibition, Rabbia’s drawing Traces (1) depicts rippled bed sheets made up of fine lines built up slowly using a silver point pen. She has described drawing as a record of the development of an idea full of personal experiences.