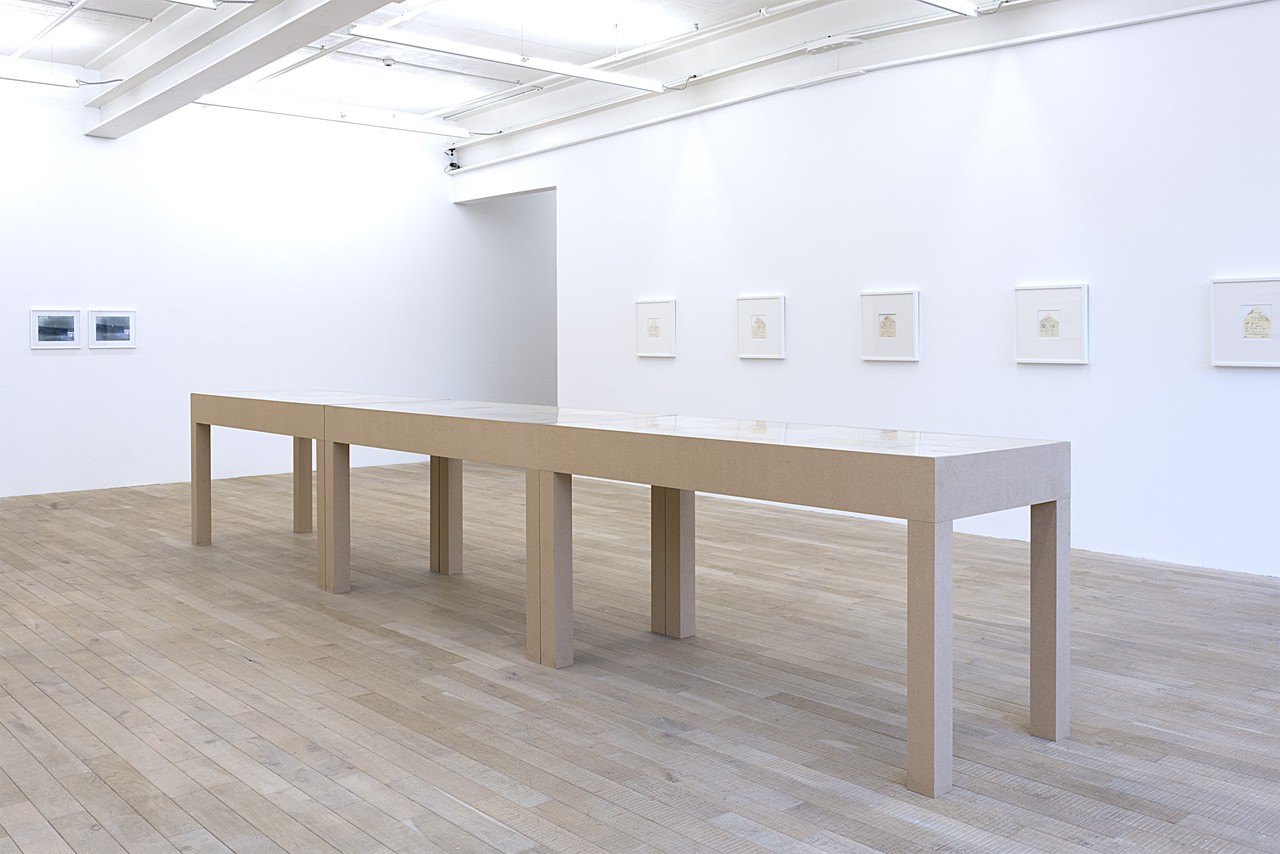 Galerie Peter Kilchmann is pleased to invite you to the upcoming solo exhibition of Albanian artist Adrian Paci. Alongside a new five-channel video installation entitled Sue Proprie Mani and its related archive material (framed and showcased), Adrian Paci will be also exhibiting new paintings as well as works on paper and a recent film entitled The Guardians.

On display in the first room is the video installation Sue Proprie Mani, made in collaboration with Roland Sejko and based on the discovery of two jute sacks in the warehouses of the Albanian State Archives bearing the label "Correspondence of Italian citizens in Albania", and in which hundreds of letters were found. Most of these were written between 1945 and 1946 by Italians who at the end of the Second World War were in Albania awaiting repatriation and never reached their destination. They are excerpts about the lives of the 24,000 Italians who arrived during the Italian occupation and stayed in Albania at the end of the war unable to return home; pawned in a political game that would last until 1949, when Italy and Albania established diplomatic relations. Filmed in the former king’s palace in Durres, Sue Proprie Mani is shown on five screens. In each film the camera searches, discovers and caresses with a very slow movement six different characters: perhaps addressees, senders, or only witnesses. They appear and disappear before our gaze, while in the background we can hear fragments of the unread letters. Sue Proprie Mani brings to light true stories; by elaborating their emotional and historical weight, and expressing an exploration of a universal nature on the theme of loss, incommunicability and the eruption of historic events in personal fates.

Along with the video installation a selection of the letters is exhibited in a showcase in the second room together with new paintings in which Paci draws upon images from television and newspaper news about migrants arriving in Italy. Here, Paci is interested in the ambiguity that results from the decontextualization and abstraction of these images, conferring the paintings a sense of openness and a different level of depth. Who are these people greeting us from the windows of a train? Where do they come from and where are they going? The paintings do not have the answers these questions. What remains is their state of being in transit; their vulnerability mixed with a strange feeling of happiness and self-confidence. It is not known that the group of people swimming has just left a crowded boat of migrants. What we see are friends having a nice and fun day together. The paintings remain in the space between these two possible explanations. The images are transformed from an element of information about a fact into a more subjective perception of an atmosphere that is not negating the context where it comes from, but is opened to other possibilities of relating to it.

The film The Guardians, exhibited in the third room, is a poetic reflection upon the relationship between childhood and death. The story takes place in the catholic cemetery in the artist’s hometown of Shkodra. During Paci’s childhood this old cemetery was not in use anymore, but remained the only place in town where religious symbols could still be found (the communist regime decided to ban all religious symbols as part of a campaign against religion, which peaked in the 1960s). The film draws inspiration from Paci’s childhood memories and is triggered at the same time by a real event. In 1990 a group of young people decided to enter the cemetery and start clearing it from the dirt and the grass that was growing around the tombs. Among the new characters that started populating the cemetery, were groups of children, who hung out in the cemetery and were paid by the owners or relatives to clean and take care of the tombs. “The image of the kids washing the tombs has been working inside me for quite some time”, says Adrian Paci. The film is characterized by Paci’s lyrical rhythm and poetic sequence maintaining a delicate balance between what is revealed and what it is being insinuated, formally and ideologically.

Paci’s works cover the fields of video, photography, painting, drawing, sculpture and installation. They are formed by an emotional sympathy for the individual. He transfers existential moments of life into stunning and timeless images. Paci sees the vulnerability and fragility of humans as their basic condition, which confers beauty and dignity at the same time. All works that are shown in this exhibition contain an ambiguity of the human being in historical conflicts and broaches the issues of life and death, migration and war.

Adrian Paci was born in Shkodra, Albania, in 1969 and he immigrated to Italy in 1997. Since then he has been living and working in Milan. He studied at the Art Academy of Tirana from 1987 to 1991. Adrian Paci’s works have been presented in numerous exhibitions internationally, such as in solo shows at MAXXI, Rom (2015); Musée d’Art Contemporain, Montréal (2014); Galeries Nationales du Jeu de Paume, Paris, France (2013); Kunsthaus Zurich (2010) or CCA, Tel Aviv (2008).
www.peterkilchmann.com/