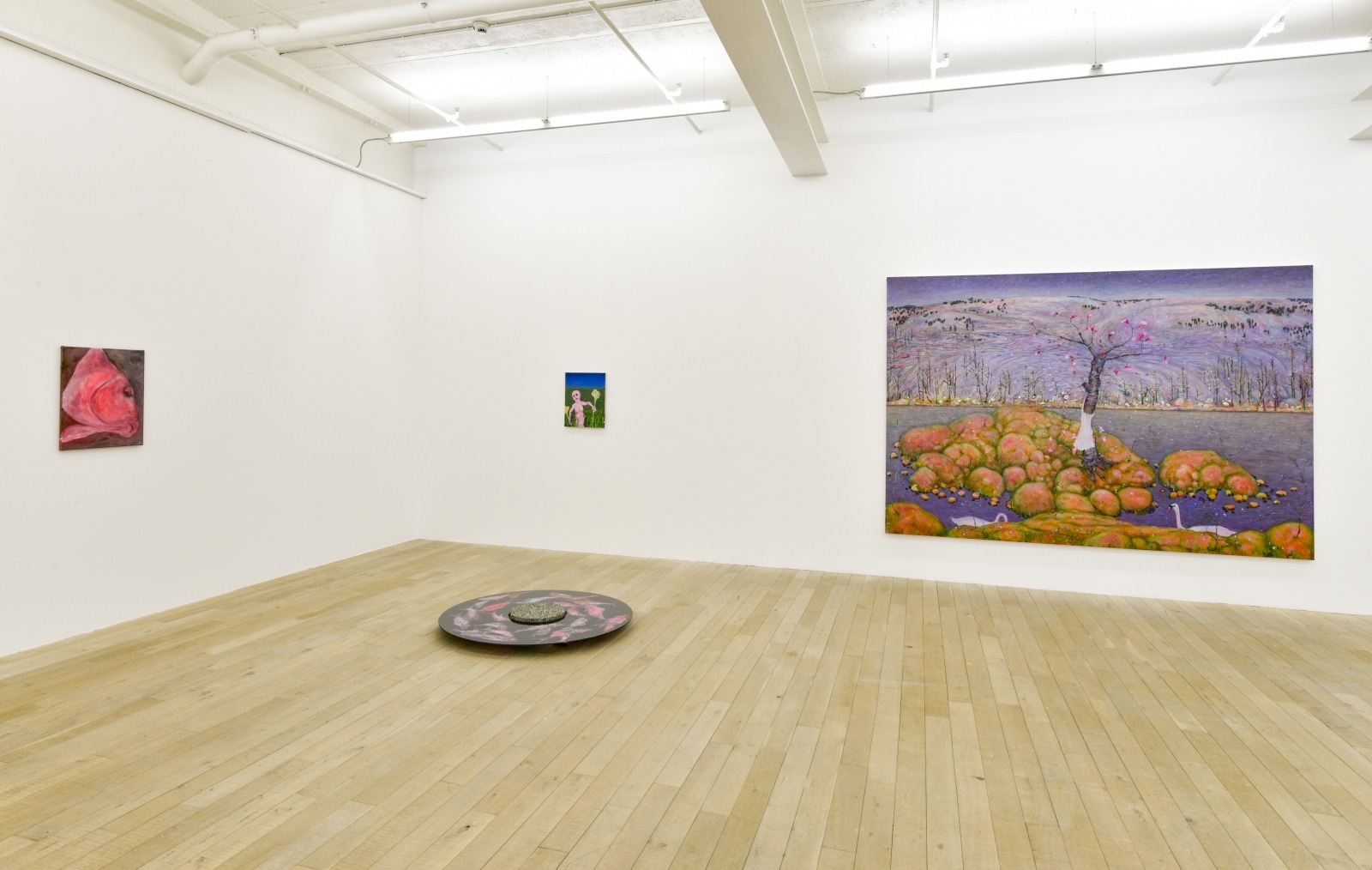 In support of the Swiss authority's efforts to contain the spread of the COVID-19 virus, the gallery will be open by appointment only until further notice. Our offices are open and our team is working. The exhibition has been extended until May 9.

We hope everyone stays healthy and safe.

In the meantime images of Andriu Deplazes’ solo exhibition Fluoresce can be viewed here.

Galerie Peter Kilchmann is pleased to present the first solo exhibition at the gallery of the Swiss artist Andriu Deplazes. Deplazes was born in Zurich in 1993 and lives and works in Zurich, Brussels and Marseille. Entitled "Fluoresce", Deplazes ties in with his recent solo show at Kunstmuseum Chur, Rote Augen, which was devoted to him as winner of the Manor Kunstpreis 2019. At the same time the exhibition will be the start of new cooperation between Deplazes and the gallery. On show will be a freshly created group of works of large and small-format oil paintings on canvas as well as a mixed group of works on paper (in mixed media).

Deplazes’ paintings create a kind of parallel cosmos that questions the habitual ways of seeing and expectations of the beholder. Wide landscapes in colourfully powerful large format are the setting for curious characters who sometimes melt into the vegetation around them or appear strangely remote from it. With Fluoreszieren Deplazes expands this cosmos: nature, which otherwise frequently appears in the form of lush forests and meadows but also flat, sparse moorland, becomes rockier and more mountainous and seems to shift human bodies and animals more intensely into the foreground than previously. The smaller formats in the exhibition show strong portraits or details of the larger works and lend them their own identity. The pale, melancholy-looking faces, whose balance is purposely brought out of kilter, contrast with their colourful background and a horizon that appears to glow in the depth of the perspective. The scenes that at first glance seem strange, on closer inspection open up many-layered levels of meaning and point to the artist’s deep cultural-historical knowledge which he transposes into a very contemporary visual language.

Works such as Hirsch und weisse Weite, 120 x 170 cm display compositorial structures which draw close reference to Symbolists such as Ferdinand Hodler and Giovanni Segantini. The first level of the picture opens the view on a stoney mountain landscape.The central axis, which is slightly shifted to the left, runs down a gentle gradient towards a horizon marked by flat hills. On the sides the land is evenly bordered by moraines and mountain promontories while a magnificent stag strides into the landscape from the right. Its strong presence arrests the sweeping gaze of the beholder who it appears to fix with an attentive eye. Parts which are usually white such as the mouth, the underbelly and the legs shine in deep pink colour pigments and tell of moist warmth and vigour. The radiance causes a feeling that entices the beholder to touch the animal. The stag, abounding in strength and borrowed from Romanticism, raises questions about masculinity and gender dogma. A similar formal construction is found in Körper, Stab und Kondensstreifen, 160 x 140 cm. The stones in the harmonious landscape shine with a deep-red glow. A solitary male figure with staff, perhaps a shepherd, looks directly into the beholder’s face. The symmetrical arrangement of the individual elements such as staff and horizon create a harmony that is only thrown out of balance by the irregular vapour trails of aeroplanes in the sky. It is a vocabulary that not least takes inspiration from Hodler’s principle of parallelism, which however is repeatedly broken by unexpected jumps in scale and restlessness of the content.

Deplazes developed a special painting technique to achieve the fluorescence of his works mentioned in the exhibition title: before he creates a painting the canvas is first grounded with fluorinated pigments. The artist then works with various layers of paint which are overlaid or flow transparently into each other. In Kletternde, 208 x 292 cm, the central figure seems like a pastel-coloured apparition whose childlike body is taken up by the strong organic trunk of the tree at the centre of the picture. The vibrant brush strokes lend the painted surface the appearance of impulsive spontaneity while heavy dark colours are partially illuminated by the light grounding. Deplazes imbues the rather serious and pensive looking characters with gently insinuated humour. The fluorescing colourfulness of the landscape points to the omnipresent digital images of a young, smartphone-influenced generation.

Some of the subject matter may bring to mind the concept of “Bad Painting” established by the curator Marcia Tucker in 1978 with an exhibition at the New Museum of Contemporary Art, New York. With Deplazes however, the disassociations are rarely banal and amusing. On the contrary, here the artist is pursuing a very carefully conceived abstraction which breaks open cultural-historical stereotypes with almost tragic irony. The work Reihe und Glied, 41 x 33 cm, shows the torso of a young man in front of a field with cut maize stalks. The rigidly ordered lines of the plants are reminiscent of lines of soldiers and grotesquely highlight the solitude of the protagonist in the foreground. Military attributes such as the beret and the epaulettes stand in contrast to his naked vulnerability. His masculinity is subtly subverted. Negating any ideal, Deplazes human figures are fascinating, and appear high-spirited, meditative or fragile and they stimulate the viewer to reflect on socially formed identities.