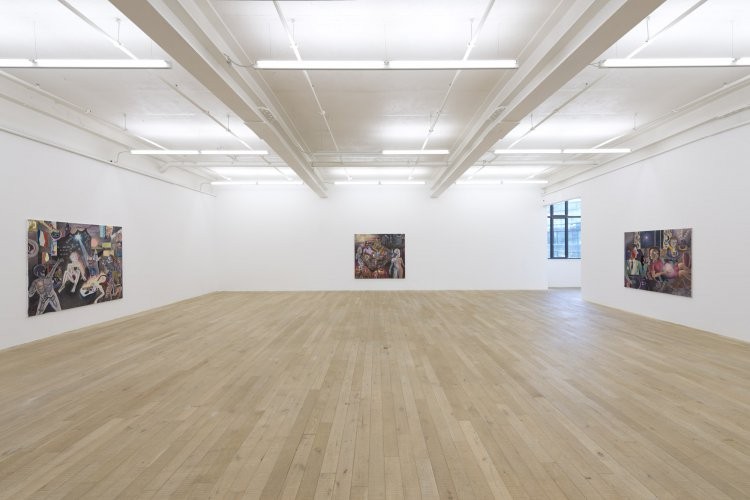 Galerie Peter Kilchmann is pleased to announce the second solo exhibition by Armin Boehm in the gallery. Boehm was born in 1972 in Aachen and lives and works in Berlin. Through his very complex imageries in terms of both content and design, Boehm creates a fascinating cosmos, inspiring the observer in a refreshingly direct, yet uncommented manner to reflect about the values and claims to validity of our modern society. Following up on his series The end of capitalism Boehm now presents a new group of works, consisting of several large and middle-sized paintings and works on paper.

Under the title Involution, Boehm, more then ever, portraits us in this new body of works as a society in its late decadent stage, as a result of which new ethics are being generated by shifting values. The primary focus in his compositions lies on the polarity of origin and development, of „back to the roots“-ideology and „high-end“-technology and the question of the role that humans will assume between those poles now and in the future.

The work „Journey to the centre of the ai“ (ai = artificial intelligence), 160 x 180 cm (see invitation card), shows a group of characters, among them two hybrid-creatures, an infant with a mechanical inner life and a cross-legged person, which – as one could assume – are residing on the precarious threshold between the cradle of mankind and the new high-end world. Resting on a wooden stretcher, they are being lifted by an African aboriginal from what seems to be a subterrestrial parallel world. On the shoulders of a further aboriginal weighs the load of the connecting stairway to the upper world. A rising cyborg with a glowing brain receives the stretcher in order to, it seems, carry it to the opposite shore of a grim looking river. Another man-machine creature with a half bare female body apathetically stares into an unknown distance. While the Earth’s opening, bathed in warm light, provides wide views of an idyllic African landscape, the seemingly threatening Shanghai skyline overshadows the far shore of the upper world.

The polarity becomes not just manifest in regards to content, but also by Boehm’s creative means. The delicately painted pastel shades and round harmonic shapes are interspersed with a sharp brush stroke and angular architectural elements. Intense and almost blinding colours shift into ash-grey shadings. Collaged pieces of fabric render the faces a somewhat sculptural, haptic appearance that increases the narrative and cinematic 3D-effect of the scenes encouraging the viewer to continue exploring.

Through pictorial processes Boehm disassembles and filters in manifold ways unadorned snapshots of current affairs creating grotesquely overcrowded and dense conglomerates infused with symbolic meaning. Similar to the endless stream of images from social media channels, the beholder is flooded with and absorbed by a colourful cosmos of cyborgs, aboriginals, embryonic figures, hybrid creatures, political leaders, cult personalities and founders of influential media corporations. The identities of the protagonist are secondary. They are metaphors not only for origin and progress, but also for actual trends, political tendencies, as well as urban and technical developments.

Boehm’s artistic means take up the formal language of avant-garde currents of Classic Modernism as well as of Old Masters such as Hieronymus Bosch hinting to his profound historic-cultural knowledge. On the other hand his imagery also deliberately makes use of recent pop culture, drawing references to cult sequences of Metropolis and Galactica or Stanley Kubrick’s vocabulary. Boehm’s compositions inspire and suggest; they tell stories with an open end allowing the beholder to expand on ideas and look for their own answers.

Armin Boehm studied at Staatliche Kunstakademie Düsseldorf in the classes of Konrad Klapheck and Jörg Immendorff. A major solo exhibition took place in 2009 under the title „The evil eye“ at the Kunstverein Braunschweig.The publication of the same name can be purchased at the gallery. Furthermore he was part of group exhibitions at the Oldenburger Kunstverein (2016), Oldenburg, at the Villa Schöningen, Potsdam (2015), at the Städel Museum Frankfurt, (2012), (all Germany); at the Goethe Institut in Johannesburg, South Africa (2012) as well as at the Schirn Kunsthalle in Frankfurt, Germany (2011) and at the CAPC - Musée d’art contemporain in Bordeaux (2011), France. At the end of the year an extensive monographic catalogue about his work of the last ten years, will be published by Hatje Cantz Verlag, Berlin (approx. 200 pages, German/ English).
www.peterkilchmann.com/