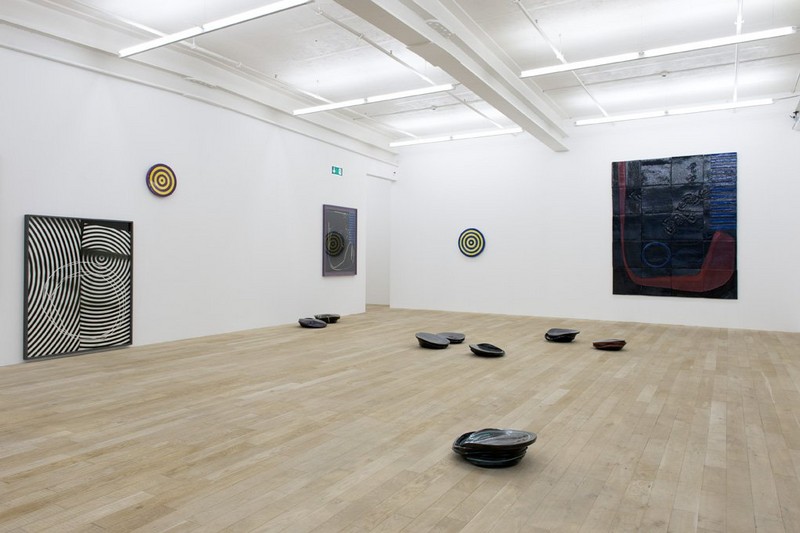 For the opening of the fall season Galerie Peter Kilchmann is pleased to present a group exhibition with three artists of the gallery. It is the first time that Armin Boehm, Fabian Marti and Erika Verzutti will be exhibited together. While the three artists differ greatly in the choice of their medium, the mutual elements found in their work amplify each other in the joint presentation. The fascination with contradiction is such a similarity. In the works of artists the feeling of ostensible normality is accompanied by dormant violence.

In the case of Armin Boehm these sentiments show themselves in the artist’s use of multilayered dark colors, which he combines with unusual materials such as asphalt, metal, sand, or cloth to create dense atmospheric paintings. Here, subjects seem to be engulfed by twilight. In Armin Boehm’s works intimacy and alienation are evoked simultaneously.
Boehm was born 1972 in Aachen. He studied under Konrad Klapheck and Jörg Immendorf at the National Art Academy in Dusseldorf. Armin Boehm lives and works in Berlin. In October 2013 he will present a single exhibition at Galerie Peter Kilchmann.

On one level Fabian Marti’s photograms and ceramics relate strongly to formalism, abstraction and op art. However, the artist is further extremely interested in the sensations related to a loss of control and the access to the subconscious. If the exhibition had a soundtrack, it would be the combination of spherical sounds and rhythmic drumming which can be heard on the audio track of Fabian Marti’s new film Because I Travel A Lot (2011, 11.00 min). In the film, which is shown in the rear exhibition space, the artist’s ceramics can be seen in varying stages of completion, spinning round on a potter’s wheel. Concurrently, a female voice-over recites a text from the philosopher and psychonaut Terence McKenna.
Fabian Marti was born in Fribourg in 1979. He studied photography at the Art Academy in Zurich and lives and works in Zurich.

Erika Verzutti presents a series of new sculptures in the exhibition. Verzutti’s works always oscillate between abstraction and representation. Often the impressions of fruit and vegetable forms can be discovered in her bronze figures. The banality and everyday occurrence of these forms is however fragmented by the choice of the material and the combination of forms, like with Brasilia Azulejo, a whitewashed jackfruit, in which a square tile was inlayed (2012, bronze, 42x25x25 cm). The shift in perception is playful – and yet the humor in Verzutti’s sculptures is accompanied as well by the potential of eroticism and violence.
Erika Verzutti was born 1971 in São Paulo. She studied at the Universidade Mackenzi, São Paulo and at Goldsmiths College, London. The artist lives and works in São Paulo. Erika Verzutti will have a single exhibition at Galerie Peter Kilchmann in April 2013.
The artists will be present for the openi
www.peterkilchmann.com/