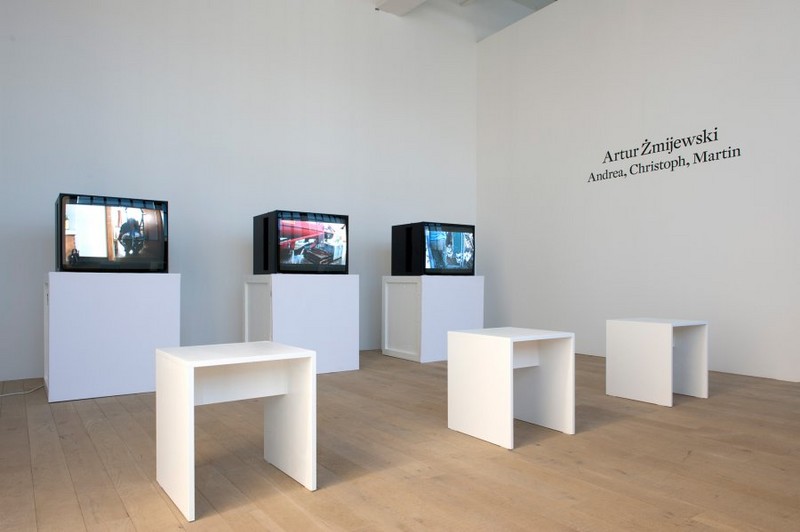 Galerie Peter Kilchmann is pleased to present the latest production of Artur Zmijewski in its project space. The piece Andrea, Christoph, Martin is compiled of three 11-minute films, shot in Switzerland last November. Zmijewski, who is known mainly for his filmmaking, is also a writer and photographer, and will be acting as the main curator for the coming 7th Berlin Biennial in 2012. Zmijewski received his training at the Academy of Fine Arts in Warsaw, where he studied sculpture. In his work, Zmijewski reflects upon the banalities, as well as the extremes of everyday-life, thus continually questioning the definition of what is considered to be normal.
The trilogy Andrea, Christoph, Martin is the continuation and probable completion of a loose series of films, which the artist started in 2006 with Polish protagonists. Consequently, Zmijewski filmed additional parts in Germany, Mexico and Italy. All of the films deal with the subject of work, especially the kind of manual wage labor performed by cashiers, factory employees, construction workers and mechanics, which is often considered as lowly drudgery. The participants of the project agreed to be followed and filmed for 24 hours. Zmijewski then rigorously edited the cumulated material to a film of 15 minutes. The films show how strongly one’s existence is dependent on labor and employment. For the most recent films the artist followed farmers with his camera. Artur Zmijewski chose this industry reasoning that the profession of farming is an ancient one, and perhaps closest to the romantic idea of the ideal occupation. We will see if this promise is kept.
We would like to indicate the publication Trembling Bodies, now available in English, a collection of interviews conducted by Artur Zmijeski with a number of Polish artists considered part of the “Critical Art” movement: Pawel Althamer, Katarzyna Górna, Andrzej Karas, Grzegorz Klaman, Grzegorz Kowalski, Katarzyna Kozyra, Zbigniew Libera, Jacek Markiewicz, Joanna Rajkowska, Monika Zielinska. In the conversations, which took place between 1993 and 2010, radical artistic positions were examined through the filter of everyday-life and the social and political changes in Poland. The collection of texts thus becomes a historic document in regards to the development of Polish art from the 1990’s until today. Zmijewski does not appear as a neutral dialog partner, but rather expects and provokes evidence and statements from his counterparts. The book is available through the gallery for CHF 40.00 (EUR 30.00), shipment not included.
Artur Zmijewski is the appointed artistic director of the 7th Berlin Biennial in 2012. On this occasion Galerie Peter Kilchmann has organized an artist talk with Artur Zmijewski, which will take place on Sunday, June 12th at 11.30 am.
Artist and curator Zmijewski will speak about the Berlin Biennial as well as biennials in general. The conversation will be held in English. Admission is free.
Zmijewski’s work has been exhibited in the following institutions: De Hallen (Haarlem, NL), 29. Sao Paulo Biennial (Sao Paulo, BR), Bonnefanten Museum (Maastricht, NL), MoMA (New York, US), DAAD (Berlin, DE), Istanbul Biennial (Istanbul, TR), Documenta 12 (Kassel, DE), Manifesta 4 (Frankfurt am Main, DE) and many others.
His works are part of collections worldwide, such as the Museum of Modern Art – Media and Performance Art (New York, US), Tate Collection (London, UK), Zacheta National Gallery of Art (Warsaw, PL), Museum Ludwig (Köln, DE), Sammlung Goetz (Munich, DE), Neue Pinakothek – Collection of Photography and New Media Art (Munich, DE).
www.peterkilchmann.com/