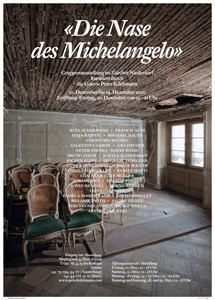 Galerie Peter Kilchmann is very pleased to announce an exhibition in two houses dating from the 14th century in the centre of Zurich.
Artists of the gallery were invited for this exhibition as well as other Swiss artists. Some will install site-specific works and some choose works that relate specially well with the fascinating interiors of these houses. The title* of the exhibition was meant to serve as an inspiration as well: „Die Nase des Michelangelo“ or “The Nose of Michelangelo” (It refers to the tragicomedy that was written in 1911 by Hugo Ball, *1886, †1927). Ball was one of the cofounders of the Cabaret Voltaire, hence the Dada movement. (The exhibition place is located right in the adjacencies of the Cabaret Voltaire building). Several installations, sculptures, works on canvas and on paper as well as video projections will be shown. About 20 rooms ranging from 8 m2 to 60 m2 will be used for the exhibition.

The group exhibition will take place on four floors in the buildings Marktgasse 4 + 6 (Niederdorf). The two buildings (‚zum Judentempel’ and ‚zum goldenen Schild’ which means ‚Jewish Temple’ and ‚Golden Shield’) were first mentioned in the 14th century. The Marktgasse was one of the most important traffic and business routes in Zurich from the Middle Ages until the 19th century. The buildings have been extended and partly rebuilt several times and feature elements of the middle ages, from baroque times and of Art Nouveau. The ground floor as well as the first floor were mostly used for business purposes (the so-called ‚Elefanten Apotheke’ (Elephant’s Pharmacy) was located in the ground floor, the oldest pharmacy of Zurich that was closed in 1994 after 419 years in business. Today there’s a flower shop). The building ‚zum Judentempel’ was used as a tailoring, as a guild house, as a Jewish School, as a restaurant (‚zum Alpha’) and as a drugstore (‚Rathaus Drogerie’). Nowadays there’s a shop on the ground floor selling antique tables. The upper floors of the buildings, which are connected, are uninhabited, not renovated and partly furnished with antiques and leftovers from previous tenants. The walls are covered with wainscot, wallpapers or painted in many layers. The rooms in both buildings have a strong charisma.

For the moment being the owner does neither want to rent nor to restore those houses. It is very unusual to find in the business heart of Zurich such locations since it is a very desired neighborhood for all kind of businesses.