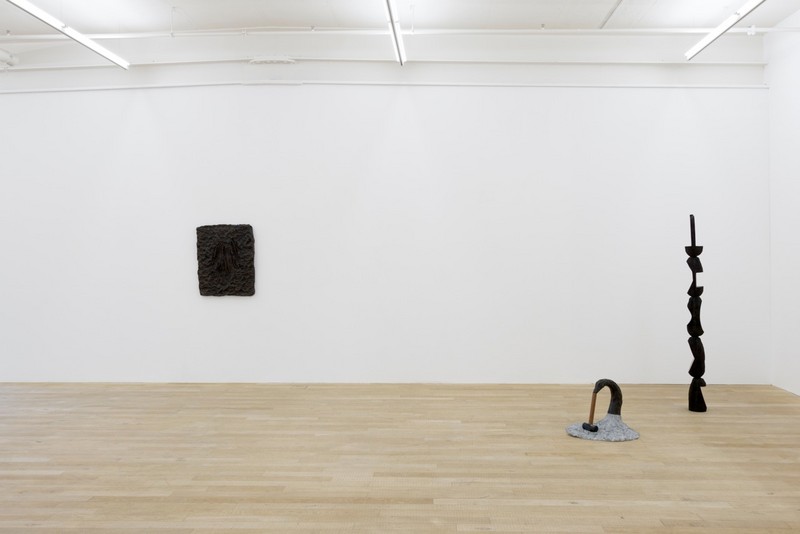 Galerie Peter Kilchmann is pleased to show the Brazilian artist Erika Verzutti - after her terrific presentation at the Carnegie International 2013 in Pittsburgh, U.S. - for the first time in a solo exhibition. In summer 2012, Verzutti was already included in a group exhibition at the gallery. Under the title "Painted Ladies", she now presents a new series of sculptures, consistently expanding her oeuvre oscillating between abstraction and representation.

On the wall, on pedestals or on the ground, Verzutti places her sculptural objects made of bronze, concrete, wax, papier mache and paint. Only recently the artist has set to work on large free-standing sculptures, which are like her previous works often reminiscent of body or fruit shapes. In the casting process carried out through the use of the very vegetables or everyday objects, volumes both grotesque and graceful, organic and geometric, are created. Verzutti's work can certainly be read within the tradition of Brazilian formalism, above all Sérgio de Camargo and Lygia Clark, but also contemporaries such as Ernesto Neto. However, to the typical concerns of this tradition related to the materials and to the forms, the artist associates a universe oriented towards everyday life and the ordinary experience of the work of art as something akin to ornament. This generates within her art a position which, in disguise, is anti-conceptual. José Augusto Ribeiro discribes Verzuttiʼs formal engagement with questions of content, form and materiality in the recently published catalog "Erika Verzutti" as follows:

"It is initially amazing that, from a few operations with ordinary elements, these pieces take on a suggestive power capable of articulating that which categories, realms, and classes separate in the domains of art, nature and social life. Furthermore, they are experiments with weights, consistencies, textures, contours, colors, sheen and temperature that contribute to induce contradictory stimuli and require viewers to use a tactile and possibly gustatory gaze for an almost synesthetic perception. What arises thereof is a composite as the work itself: it involves humor, beauty, eroticism, estrangement, and violence, all at once. Put in another way, the work is succulent and acid and sweet and sour and bitter, in several senses." (José Augusto Ribeiro, in: Erika Verzutti, Cobogó, Rio de Janeiro, 2013)

In the mural sculpture "Gravid" (2014, bronze, concrete and acrylic, 75 x 58 x 25 cm) – the title coming from the Portuguese word grávida which means pregnant – as well as "Boyfriend" (2014, bronze and ostrich egg shells, 50 x 62 x 14 cm), the human appearances are denaturalized and fragmented by the choice of materials and the combination of forms. The representation is further doubled, which inevitably takes female or masculine shapes. Another mural sculpture "Portrait of an Angry Lady" (2014, bronze, wax and acrylic, 44 x 35 x 10 cm) acts on a even more direct level by reducing the contour to a relief-like portrait of a woman, as if the artist was to reinterpret a painting by Picasso. Verzutti further abstracts the formal vocabulary of wildlife in her sculptures. The free-standing sculpture "Peacock" (2014, papier mache, bronze and iridescent paint, 115 x 120 x 20 cm) vaguely displays the shape of the very animal, and despite its formal reduction it does not lose any elegance nor majesty. "The Painted Lady" (2014, papier mache, wax and acrylic, 105 x 74 x 23 cm), another free-standing sculpture which borrows its name from a colorful butterfly with global distribution also refers to the title of the exhibition. The sculpture playfully alludes to gender-specific contents and symmetries.

Erika Verzutti, born in 1971 in São Paulo, has already shown in various international exhibitions. Just recently she was included in group exhibitions at the Wexner Center for the Arts in Ohio (2014), the Mercosul Biennial in Porto Alegre (2013) or the Hara Museum of Contemporary Art in Tokyo (2012). In 2012, Verzutti was further having a solo exhibition at the Centro Cultural São Paulo. A milestone for the reception of the artist in the U.S. and in Europe was her participation in the Carnegie International in Pittsburgh, 2013, curated by Daniel Baumann and Tina Kukielski, as well as the Biennial in Lyon, 2011, curated by Victoria Noorthoorn. Private and institutional collections of her work comprise the Guggenheim Collection in New York, the Arizona State University Museum in Tempe, the Carnegie Museum of Art in Pittsburgh, the Museu de Arte Moderna in São Paulo, the Instituto Inhotim in Minas Gerais and the Colección Cisneros in Caracas, to name just a few

From July 5 until November 16, 2014, Erika Verzutti is having the solo exhibition "Opener 28: Erika Verzutti: Mineral", curated by Dayton Director Ian Berry, at the Tang Museum at Skidmore College in New York, which will also include an exhibition catalog. Until November 30, 2014, her works are further on display in the group exhibition "Salon distingué", curated by Nadia Schneider Willen, in the Museum Langmatt in Baden, Switzerland. The new catalog "Erika Verzutti", published by Cobogó, Rio de Janeiro (2013, 176 pages, 27 x 21 cm, text in English and Portuguese), can be purchased at the gallery.
www.peterkilchmann.com/