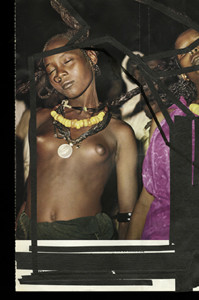 Galerie Peter Kilchmann is looking forward the first main exhibition of Fabian Marti (born 1979 in Freiburg/CH) following his debut in our project room in March 2007. Marti will enliven the entire gallery with his exhibition. He has created several new series of photographic works, as well as three clay sculptures.
For these new series, Fabian Marti made use of the range of magazine pages printed from the 1960s through to the 1980s. He chose black/white and color shots of prehistoric, archaeological findings such as Roman vases, horse reliefs and bronze sculptures. These images were typically published in full-page format in magazines and tacitly contributed to the aestheticisation of history. Marti also has chosen images of modern paintings and stalactite caves, as well as a photograph of a female member of a Central-African tribe, dancing in a state of trance. This is the picture on the invitation. Taking this image, which for Marti is the key piece of the exhibition, as a motif, a series was created. Five works will be on display, all of them in a 226 x 150 cm format. In an interview, Marti comments on this work:
“The picture had been laying in my studio for a long time and I wasn’t sure what value I should attach to it. Suddenly it dawned on me: I am this dancer myself. I can relate to her naivety and blindness towards the world. In this sense, the woman can be considered as a kind of metaphor for the artistic identity."
As in previous works, Marti distorts the images he found by applying the collage technique. Then, he scans the completed collage and amplifies it. The result is a digital photogram, which adopts a haptic presence throughout the procedure. For this exhibition, he has employed several formats ranging from 60 x 80 cm to 226 x 150 cm. Through the technique of applying masking tape, Marti distorts not only the picture but also its message. The artist explains in his own words:
"I believe that all knowledge from past eras – the entire timeline- originates in the human being. Not only in the sense of intellectual knowledge, but also as regards, instinct and emotion. Basically, these pictures are replaceable and, in my opinion, are all on the same level."
Marti also expresses his interest in the ideas of contrast and receipt in his new clay sculptures. Thus he unites the constructive structures through geometric shapes and lines and the organic, almost primitive character of the roughly crafted and burnt clay. The sculptures measuring approximately 70 x 50 x 50cm are placed on plinths.
Fabian Marti’s exhibition debut last year was followed with great interest by the art world and opened the doors for the artist to various exhibitions in national and international institutions and galleries. Marti’s work is present in several international collections. In 2008, he participated in the following exhibitions: “Der Garten der Pfade, die sich verzweigen” (The Garden of Forking Paths), curated by Heike Munder, in the exhibition room of Deutsche Bank, Salzburg, as well as at the exhibition "The Eternal Flame", curated by Sabine Schaschl and Burkhardt Metzler, in Kunsthaus Baselland. This year, he also received an invitation to take part at Valentin Carron’s exhibition, “Âpre mont”, in the Centre Culturel Suisse in Paris. Furthermore, he was present at "Legend" at the Domaine de Chamarande in Chamarande. In London, his works were displayed in the “Past-Forward” exhibition, part of the Zabludowicz Collection at 176.
The coming exhibitions in Galerie Peter Kilchmann will be opened on January 16, alongside Willie Doherty’s new film, “Body City”, and a new series of works by Teresa Margolles. In light of this year’s Frieze Art Fair in London, Galerie Peter Kilchmann will be showing works by Rita Ackermann, Michael Bauer, Raffi Kalenderian, Fabian Marti, Duncan Marquiss and Andro Wekua.
www.peterkilchmann.com/