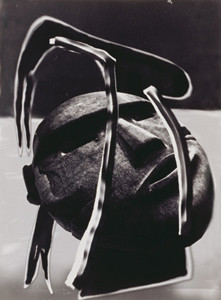 Galerie Peter Kilchmann is pleased to present the third solo exhibition of Swiss artist Fabian Marti. The exhibition rooms will be transformed into a domestic setting using simple wooden structures and the integration of objects such as carpets and photographs designed by the artist. The works can be interpreted in many ways. The installation as well as the exhibition title could be a reference to the Freudian therapy room with its couch, the carpets and sculptures.

The sculpture, The Death of Joan Vollmer B., consists of a horizontal perforated chrome steel pipe that slowly turns around on its own axis. Lightbulbs are glowing in the inside of the pipe. A casual play of light and shadow is projected onto the walls. The sculpture alludes to the “Dreammachine” by Brion Gysin and William S. Borroughs. Their idea was that every American household should dispose of such a dream machine next to their television set in order to inspire their day dreams. Fabian Marti ́s sculpture, however, has been shot at by a gun. It ́s more monumental and tragic, as it is dedicated to William S. Borroughs ́ wife. Joan Vollmer B. was shot by her husband during their drunken performance of "William Tell“.

Also, the African mask appears as the central motif among the sculptures and collages. Non Ho Sonno and Trauma from 2010 are plaster-masks that had been downloaded from a 3-D web database, then printed and varnished over with paint. The motif of the mask here is broken up by free forms, that Fabian Marti has applied digitally. Some of them are alienated with abstract forms. These works extremely compelling and raise questions about altered state of consciousness and the question of identity, as was the case in Freud ́s therapy room. Composition 1950 constitutes a new treatment of the photogramme, but also of painting in general. It was created in the dark room. Within these works, Fabian Marti combines two foils: one with the familiar motif of “his” African masks and the other with a drawing that the artist created using Photoshop. The mask is an appropriation, while the “free” drawing expresses a close formal connection with a painting by Francis Picabia that goes by the same name Composition 1950. Fabian Marti refers to this series of photogrammes as time-travelling between modernity and the present.

Fabian Marti belongs to a young generation of artists who question and reuse the authenticity of photography and sculpture. Instead of taking photographs of the world with a camera and forming sculptures with a chisel, he employs techniques such as scanners and printers or creates his pictures in the dark room without negatives.
Fabian Marti (1979, Switzerland, living and working in Zürich) studied photography at the Hochschule der Künste in Zürich (Zurich University of Fine Arts). His first catalogue has been published this year within the “Cahier d’Artiste“ series alongside texts by Heike Munder and Daniel Baumann. He was awarded the “Manor“ art prize of the canton of Zurich and as a result has been invited to hold a solo exhibition and publish a catalogue at the Kunstmuseum Winterthur in 2011. Over the past few years, the artist has held the following exhibitions: “ELM MR CL MYMULW”, Trudel Haus, Baden, “Ruins, Regrets and Visible Effects” with Piero Golia at Istituto Svizzero, Rome; “Der Garten der Pfade, die sich verzweigen“, curated by Heike Munder in the art room of Deutsche Bank, Salzburg; “The Eternal Flame“, curated by Sabine Schaschl and Burkhard Meltzer, in the Kunsthaus Baselland, “Âpre mont” curated by Valentin Carron, in the Centre Culturel Suisse, Paris. Furthermore, his works have been on display in London in exhibition room 176 Zabludowicz Collection. Various interviews and press articles have been published on his works in "Artforum", "Mousse" and "Flash-Art" and can be viewed at the gallery.
www.peterkilchmann.com/