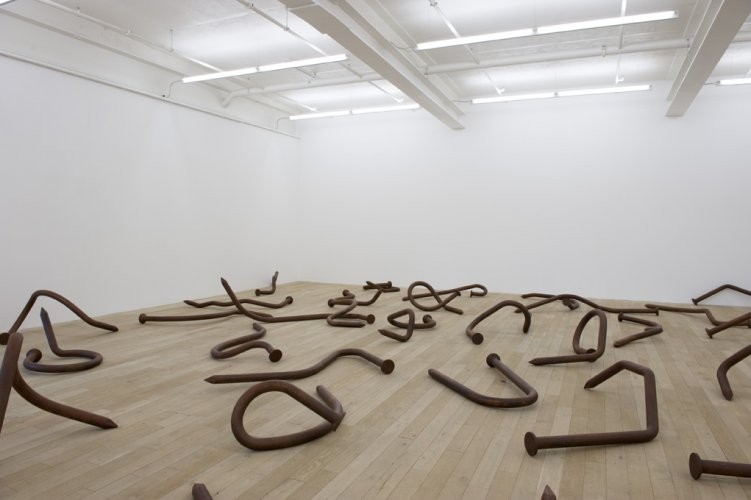 Galerie Peter Kilchmann is pleased to present this single exhibition by Los Carpinteros.
Graduated from the Superior Art Institute of Havana, the collective, consisting of Dagoberto Rodríguez (*1969) and Marco Castillo (*1971), currently live and work in Madrid, Spain as well as in Cuba. On the occasion of this exhibition Los Carpinteros will be showing a series of new works, including sculptures, large works on paper, and their new art film Pellejo.
Upon entering the gallery, one encounters forty metal sculptures that seem to cover the floor of the first gallery space. Clavos Torcidos [Twisted Nails] (2013) is an installation comprised of large-format nails (approx. 150 – 200 cm, each). Seemingly twisted and rusty the nails look like they have been extracted from their former purpose and discarded. The motif of “Failure” comes to mind. Bent out of shape, the nails have lost their purpose, when in reality the sculptures have been carefully crafted. Here, the ordinary becomes extraordinary. The different contours drawn by Clavos Torcidos resemble lying bodies, which are sleeping in different positions or the falled men after combat – in both cases the work discusses on the human shape and its suffering. This physicality finds an echo in the second gallery space, where the video work Pellejo is shown.
Pellejo [Skin] (2013) is the second film made by the collective. A black and white HD projection shows the passing of time while two actors perform a sexual scene with each other. As an analysis of life and the essence of human existence, the film is a meditation on the meaning of time. The title itself refers to “skin”, the part of the body that displays the most physical signs of aging and therefore may be seen as a symbol for change and temporality.
In a third gallery space Los Carpinteros show new works on paper. Situating an object against an empty background that seems to convey some sort of landscape, the playful title of the works reveals what is in front of the viewer: Mohawk (2013, 87 x 121 cm, framed), Mullet (2013, 87 x 121 cm, framed), and Punk (2013, 87 x 121 cm, framed) must of the drawings refer to different hairstyles that became famous during the 1980s and that are now seen as wooden poles on sand dunes.
The large-format sculpture Bola de Pelo [Hairball] (2013) marks the final peak of the exhibition. Continuing with the tendency of Los Carpinteros to formulate one motif in a variety of techniques, the sculpture shows the hairball as an abstract sculpture. While traditional sculpture is a reflection on volume, this piece shifts the focus to the idea of a possible "skin" of the sculpture.
Los Carpinteros are currently also exhibiting their installation Candela (2013, various formats) in a solo show with the same title at the contemporary art space Matadero de Madrid, in Spain until July 21. The installation reflects the energy of the current social times with the help of a backlit mural showing flames. The backlight is a lighting technique traditionally used in large political portraits in public spaces in Latin America. For their participation in the 4th Biennial of Thessaloniki the collective will show the photograph series Túneles Populares (1999, each 130 x 185 cm, framed).
www.peterkilchmann.com/