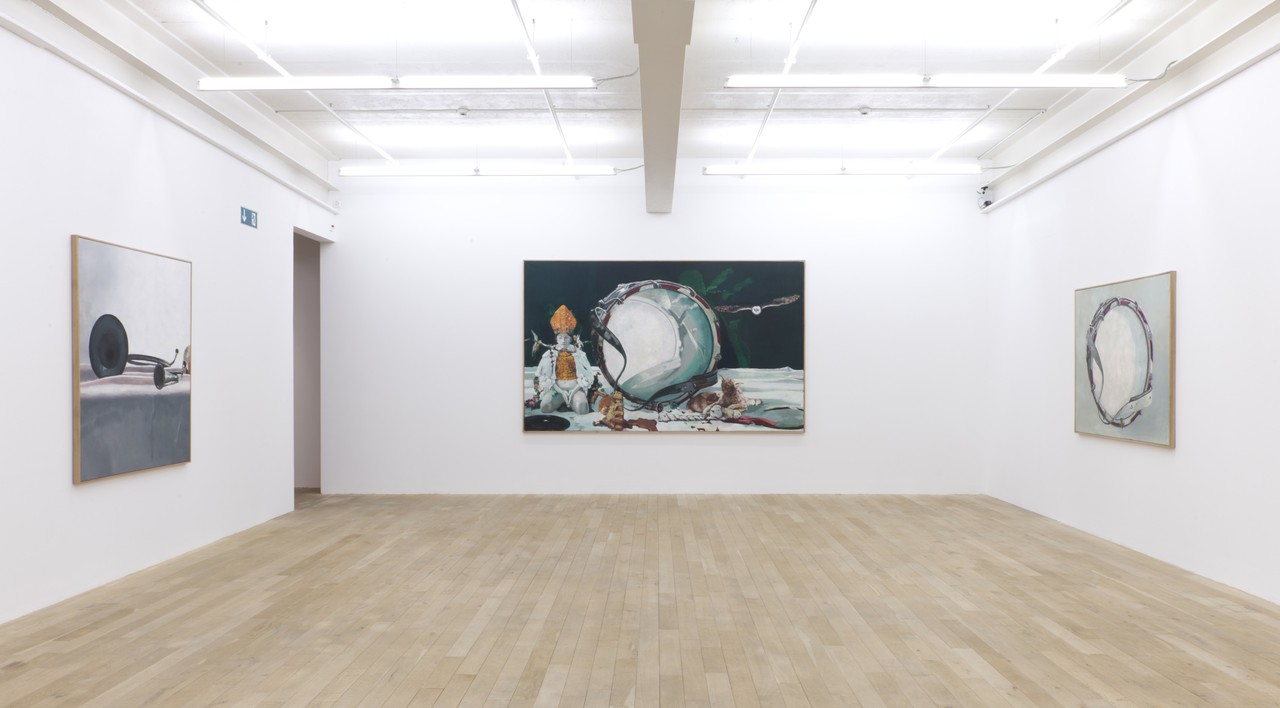 Galerie Peter Kilchmann is pleased to present the second solo exhibition by Marc-Antoine Fehr. On view are new large- to small-format oil paintings as well as gouache works on paper.

The main emphasis, in contrast to the previous gallery exhibition in 2014, is on the human figure. Only in one of the four main works - the one with masks lying on an ice field - Fehr chose to use a substitute for human heads. Otherwise it would have came across too dramatic and pathetic. In spite of the gloomy and apocalyptic mood evoked by the theme, the work resonates a certain playfulness, even if grotesque and puppet play-like. Although it is very bright and almost colourless, the title of the exhibition, “Nocturne”, also applies as the title of this work.

The three portraits entitled “Ruth” could also be seen as details of a dream scenery. Also here, it is night and one sees animals, a rising moon.

In one of the large format paintings entitled “The Kingdom of Death” (200 x 290 cm), Fehr has also employed the method of improvisation, allowing him to be guided during the creation process. The theme of the painting is not new to him; already twenty years ago he painted a similar work that represented a turning point in his career and is therefore also on view in the exhibition. Entitled “The Natural Theater of Oklahoma” (a reference to the last and unfinished chapter of Kafka's novel “Amerika” in which the hero, Karl Rossmann, while job hunting, finds himself in a huge open-air theatre, at the entrance of which young girls dressed as angles and standing on high posts welcome visitors by blowing wildly on trumpets. This kind of "theatre" recalls the great artificial worlds that were built at the beginning of last century in the form of amusement parks in Coney Island and elsewhere. In the new painting, Fehr has tried to interweave reality and dream into a scenery that is breaking apart and dissolving towards the upper edge of the picture, and in which people are wrestling, making love; in a sort of Last Judgement.

At the bottom of the painting, on the other hand, the staff of the park, two salesmen in a booth, a doorkeeper, further left a woman in old clothes waits adrift for the opening of the park.

The large drum seen on further works was painted after a drum owned by Fehr. It took decades for the artist to fulfill his childhood dream and own a large drum. Now that he finally has one, he rarely uses it, but it has surprisingly became the subject of his paintings, with several variations. In the work “Le Tambour” (200 x 290 cm) it appears in front of a gloomy white backdrop, the draping of the tablecloth evokes, as so often, a wide and romantic winter landscape. The drum drives marching soldiers into the war. Thus, in this image, e.g. the totality of all war parties, mankind.

In another painting Fehr uses the same drum as the centre for a narrative with human figures and animals. The work is called “Les Enfants” (200 x 290 cm) and, unlike the latter, it does not have an apocalyptic but rather a child’s dream mood. Children are seen wearing costumes and playing. A girl kneeling on the floor is wearing luxuriant papal costumes over her naked body, her gaze far into the distance, her hands folded chastely in her lap. In a former version, a boy, leaning against the right side of the drum, was seen whistling and holding his genital (or rather a paper tube). Fehr decided to paint it over, but his traces can still be seen indistinctly in the night sky as well as on the eardrum. Here the logic of the dream prevails. Certain elements such as the animals are executed quite realistic, the owl, the lynx, the small birds. On the other hand, the objects lying around the floor, used apparently for costume play, cannot be clearly identified. The work addresses the awakening of sexual impulses, the costumes etc., and furthermore the lurking of life, fate, dangers, death etc. (animals). The work also represents a return to his working method of the 1980’s, to let his ideas flow without knowing what the painting is about or how it will turn out.

In addition, several small-format oil paintings and works on paper will also be on display.

Catalogues have been published on occasion of the exhibitions at Center Culture Suisse and Helmhaus Zürich.

Marc-Antoine Fehr's works are present in museum collections in Zurich, Aarau, Neuchâtel, Olten and Bern as well as in countless private collections.

The artist will be present at the opening.
www.peterkilchmann.com/