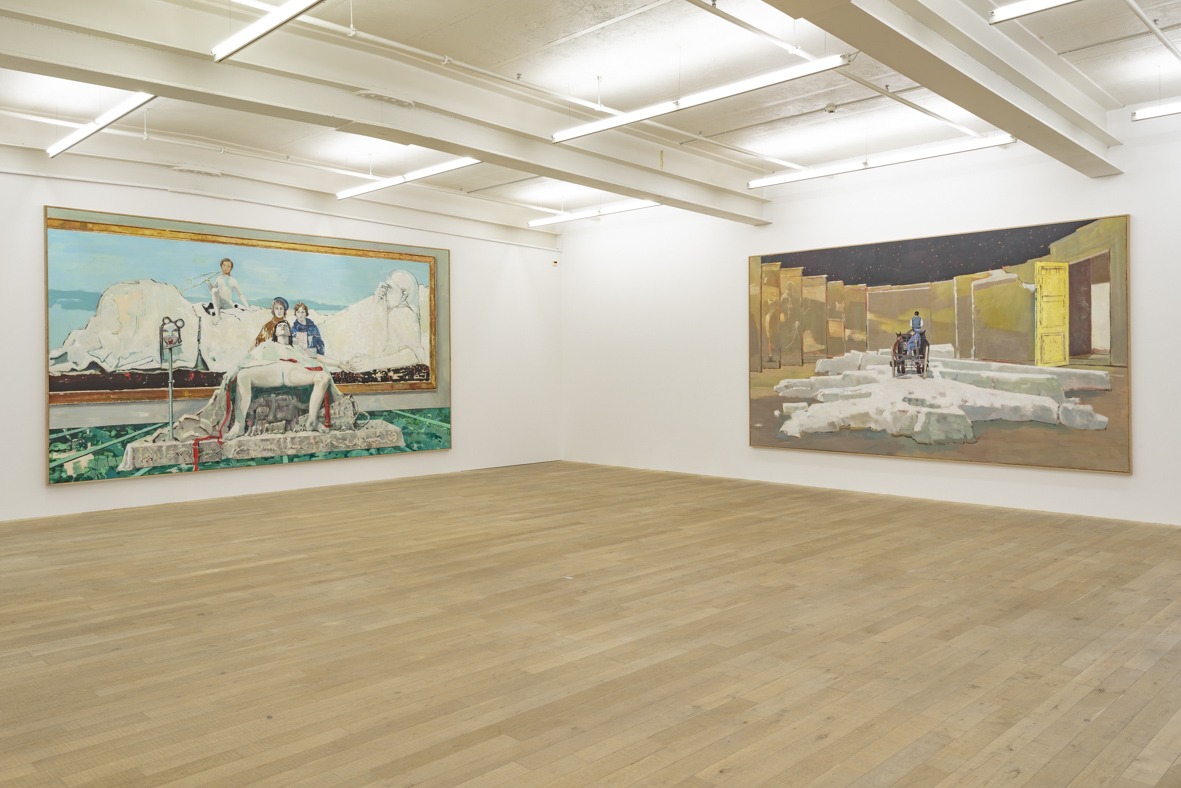 Galerie Peter Kilchmann is pleased to present the third solo exhibition at the gallery by the Swiss painter Marc-Antoine Fehr. Fehr was born in Zurich in 1953 and lives and works in Zurich and Burgundy. The artist’s compositions, with their complex painting techniques and subjects, are often part of large-scale picture cycles that are thematically interwoven. Thus, Les Adieux could be seen as the third and final part of a trilogy that on various levels ties in with the two past exhibitions Fêtes (2014) and Nocturne (2017). The exhibition will extend through all three gallery rooms and includes new oil-on-canvas paintings in monumental and medium-large formats as well as a number of small watercolors and drawings on paper.

Four large-format paintings, which take up the theme of the title in the first room of the gallery, form the opening of Les Adieux: they are melancholy scenes evoking a vague foreboding that simultaneously cast a spell. Realism and fantasy intermingle. The reduced, subdued range of colors makes the works appear as if they are beneath a nostalgic dreamy patina. Le repos de la coiffeuse, 300 x 500 cm (see invitation card), is the most dense of the four paintings. It is inspired by the Charles Baudelaire poem La Géante which fascinates the artist since his youth. It shows a young woman lying back on a plinth at the center of the picture. Her head is leaning backwards with her eyes raised mystically aloft and her giant-like limbs loosely outstretched. Her body is only covered by a soft drape in the area of her torso while her bare legs are invitingly open. Behind the central figure two young women look the beholder directly in the eyes. Through a trompe-l’oeil effect of the simulated architecture the exhibition space appears optically extended and the beholder is almost drawn into the scene. On a second level of the picture a painting can be seen behind the foreground figures. It shows a female figure lying in a stiff pose resembling an ancient sculpture with her ivory-colored tones. Her indefinable body is veiled by a sheet similar to a rocky mountain landscape. Rising out of the sheet, as if from torn paper, is the figure of a young boy. It is the surreal depiction of the genealogy of the artist whose mother, Marie-Hélène Clément, was a painter herself.

A similar intermixing of picture levels, which is however very much calmer, can be seen in works such as La Salle and L’Atelier. L’Atelier shows the artist sitting on a ladder while painting a monumental composition of a barn owl. It is in a corner of the studio whose walls meet the picture axis at a precise right-angle. On the right-hand wall there is an open doorway with a free view into the garden with its lush green that contrasts with the warm brown and ochre tones of the interior. There are two interlocking levels, on the left that of painting and on the right that of the landscape. At the same time the sultriness of an especially hot summer seems to hang in the air making the peace and quiet of nature appear almost threatening.

The work La Salle shows an interior which becomes a theatrical stage due to the staffage of backdrop walls and the open door to a darkened back room. In the middle of the composition is a recurring motif, familiar from Fehr’s group of works Le Livreur: it is the horse and wagon with carriage driver and stableman heading towards the vanishing point across an ice floe. Here painting methods are set against one another and the levels and dimensions intermixed without at any point disturbing the unity of the composition.

An ancient Roman sarcophagus with bacchanalian cherubs is depicted in Une ancienne tombe. Despite the classical paintwork this is no re-telling of a story from antiquity but rather fragments from past times. A small child in front of the tomb relief stands for the position of the artist. The child is feeling for something with its hands that it cannot grasp. Fehr himself often compares his work with that of someone in the ruins of an ancient historical site looking for blocks of stone in order to construct a new building. Painting itself has always been important for Fehr: during the painting process he often comes closer to the truth of a picture that had perhaps removed itself from the true-to-subject depiction on which he was originally focused. Elements of the original subject are suddenly removed and replaced by the painterly material itself. In conversation, he sometimes compares his large figuratively painted formats with the bizarre paintings that he saw as a child at fairgrounds at carnivals, which for him present a very direct, impulsive demand.

The medium-large formats in the second room show individual protagonists and motifs disengaged from the context of the large- scale compositions to take on their own identity. In La Maquette two transparent figures, a young woman and a boy, are carrying a stretcher with a broken model of urban architecture. Their translucent, mystically glowing faces have a wistful look. They appear to be bidding farewell to something far more important than the model and thus again take up the leitmotif of the exhibition.

A selection of watercolors and drawings that are thematically connected to the paintings rounds off the exhibition in the third room of the gallery. Individual figures and key moments from previously viewed scenes are taken up again and playfully brought to mind. Despite their sketch-like character the drawings are not to be seen as preliminary studies. Rather they show an alternative, perhaps less serious view of the storyline of the paintings and are an important component of the whole cycle of works. There will also be a group of gouaches that were recently published in the artist book The Walk of the Blind Man (Edizione Periferia, 2019).