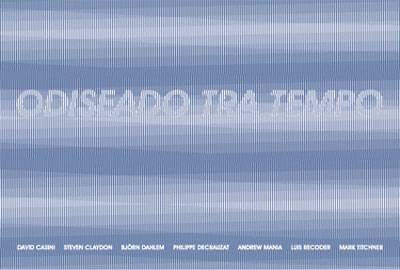 This exhibition proposes a voyage through time, an “Odiseado tra tempo” in Esperanto, inspired by elements of the past, by a fascination for science fiction and forms of spatial mythology and by utopian worlds. This group show presents, for the first time in Zurich, the work of seven artists from the international contemporary art scene.

As confidence in the future declines and new ideologies become increasingly rare, contemporary artists turn to past artistic and philosophical movements for inspiration as well as their own national traditions. Fascinated by the idealism of these inspirational models, their work seeks to propose a new perception of the present without reverting to nostalgia. Overall, their references span from the end of the XIXth century up until the 1960’s and the 1970’s. These artists play with anachronisms combining outdated scientific theories and aesthetics. They are interested in the symbolic charge that these re-appropriated elements contain, reflecting the transmission of their heritage over generations through popular culture. Subtle transpositions, sliding concepts, irony and unexpected combinations are central to their works. Through the encounter of these « individual mythologies » this show seeks to create an unexpected abstract atmosphere suspended in time.

The cosmos and all its related visual mythical elements (stars, planets, meteorites, etc) is one of the themes developed by several artists. Björn Dahlem (Germany, 1974) is well known for his sculptures and large scale installations representing physical phenomena and pseudo-scientific models inspired by modern scientific theories. The new piece proposed by the artist for this show represents the hypothetical elementary particle Higgs Boson in the form of a lamp, built with recuperation material assembled in a most utilitarian, typical German style. His playful approach brings into question our belief in exact science.

The work of David Casini (Italy, 1973) explores the iconography of popular and artistic traditions, extracting their mythical and fantastic aspects to create timeless objects. In the new works exhibited he focuses on spatial forms developed in the design and cinema of the 1960’s in parallel with man’s first steps on the moon. He thus developed a series of sculptures representing meteorites, lunar scenery, craters, mysterious rocs, where both, anxiety and fascination are present. Casini seeks to create a new sophisticated language by reworking found objects through the use of traditional craft working methods inherited from his Italian culture (ceramics, sewing).

In a “doomsday” atmosphere, Steven Claydon (UK, 1969) proposes a series of enigmatic pieces which stage in the distant future, heterogeneous elements of the civilization of the XXth century as archaeological detritus from our times. In Benign Tumour (Doonesbury head), the artist blurs the boundaries of genre by using dual references to historical models (Renato Bertelli, Head of Mussolini, 1933) and to popular cartoon figures to construct the portrait of a grotesque and morally ailing society. Using the same process of appropriation, Claydon presents also a series of poster format works associated with craft imaginary.

Mark Titchner’s work (UK, 1973) explores systems of belief, ideologies and corporate identities. The artist explores the potential of images and words as instruments of power or generator of a common identity. Presented in the form of slogans or aphorisms, his computer-generated prints propose authoritative statements on existential questions, pointing to the emptiness of corporate language or even the evangelical tone of sects. Regarding the pieces created for this show, Titchner explains the starting point of his texts as “the difference in scale of the human world and the absolute infinity of space (...), and particularly the futility of placing human concepts on something ultimately unknowable”. Graphically, his work combines the form of psychedelic posters, Eastern European revolutionary propaganda, spiritual aesthetic, and fonts which evoke Russian constructivism.

The work of Philippe Decrauzat (Switzerland, 1974) situates itself in the Swiss School of abstract art, developed in the 1970’s by artists such as John Armleder and Olivier Mosset. Decrauzat is also particularly indebted to Op Art and to practices, as he puts it, “investigating the status of image”. The forms and motifs used in his paintings and murals are drawn from industrial design, cinema, music, literature and architecture. The relationship with the initial source of inspiration is not critical for him and – intentionally rendered - indecipherable in the finished work. Decrauzat attempts to extract the visual and spatial qualities inherent to his models and develop their effects in a computer-generated process of deconstruction, simplification, inversion or expansion.

In contrast to the numeric era and engaged with the formal approach of the 1970’ Structural Film, Luis Recoder (USA, 1971) has developed a work on fundamental elements of cinema. His work, as described by Whitney curator Henriette Huldisch, creates “conceptual cinema works that explore the relationship between the film material, film projection and the space of the cinema”. Featured in this show, Available light : Shift is part of an open-ended series started in 1999. This serried is based on film exposure experimentation, working directly on the film strip’s photochemical surface without a camera. The artist is interested in the perception of light and colour and, as he says, in “the discrepancies between the film-as-object and its defamiliarization in projection”. The visual result can be compared with the work of the light sculptor James Turrell.

Whatever medium he uses, Andrew Mania (UK, 1974) questions our perception of the world, the conventions and artifice of image making and the act of looking itself. Appropriating heterogeneous elements from the formalistic art tradition in a frivolous way, his works express a poetic will to recompose the magic of moments that occur in every day life and often go unnoticed. Space Man is part of a series of short videos collectively entitled Moving Stills. The artist explores the perception of space and its composition through simple staging and low-tech effects to create a dream-like atmosphere. Seen through a light-bulb, the deformed image of a man in the centre of the globe embodies the questions posed by many of the works exhibited regarding the future and the meaning of existence today.