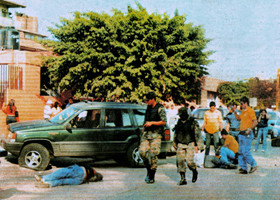 Galerie Peter Kilchmann is looking forward to announcing the third solo exhibition by Mexican artist Teresa Margolles (*1963 in Culiacán, Sinaloa, Mexico). Alongside her canvases, a selection of photographs and objects will also be on display.

„Violence, homicide and death are the focus of Teresa Margolles’ artistic and political discourse. She forges an aesthetics that is related to death on the one hand and to the lifeless body in its different stages and with all its sociocultural implications on the other.

In her meticulous research, Margolles and a group of friends seeks out the crime scenes of the acts of violence to collect traces from the ground in situ using linens. Here, Margolles is interested in the aspect of abstraction and the representation of physicality. Narration and testimony form the centre of her work. The “colour“ used in the “pictures“ displayed in the exhibition is predominantly human blood. It stems from the victims of violent acts who were killed as a result of the ongoing conflicts between the drugs mafia, rival gangs and executing authorities of the Mexican Government.

Margolles’ linens are not only the picture itself, but their material content and significance turn them into symbols and carriers of symbols. Margolles considers these pieces of cloth as a means of communication, as vehicles that serve to transport meanings on a double level: The material being an actual carrier of absorbed blood and other bodily secretions as well as a conveyor of history and histories. Margolles’ art is deeply political and sociocritical, telling of a society in which violence has become the norm and where indolence, a lack of solidarity, recklessness and egoism are constantly increasing. (Original text: Hartwig Knack, 2008)

Teresa Margolles’ solo exhibition "En Lugar de los Hechos – An Stelle der Tatsachen” (In Lieu of the Facts) will be on display until 15th February 2008 in Factory, Kunsthalle Krems. Further works will be shown within the group exhibition, “7 + 1 Project Rooms”, in MARCO, Vigo, also until the 15th February 2009. Also in Hamburg’s Galerie der Gegenwart in the exhibition “MAN SON 1969. Vom Schrecken der Situation" (About the Horror of the Situation) from 31st January until 26th April 2009. Furthermore, the artist is going to carry out a project for Creative Time in New York during the summer.

The artist will be present at the opening. For press enquiries or any further information, please contact Florian Seedorf by telephone: +41 44 278 10 10 or by e-mail: f.seedorf@peterkilchmann.com.

In the second space of the gallery will be simultaneously the opening of the new film by Willie Doherty.
www.peterkilchmann.com/