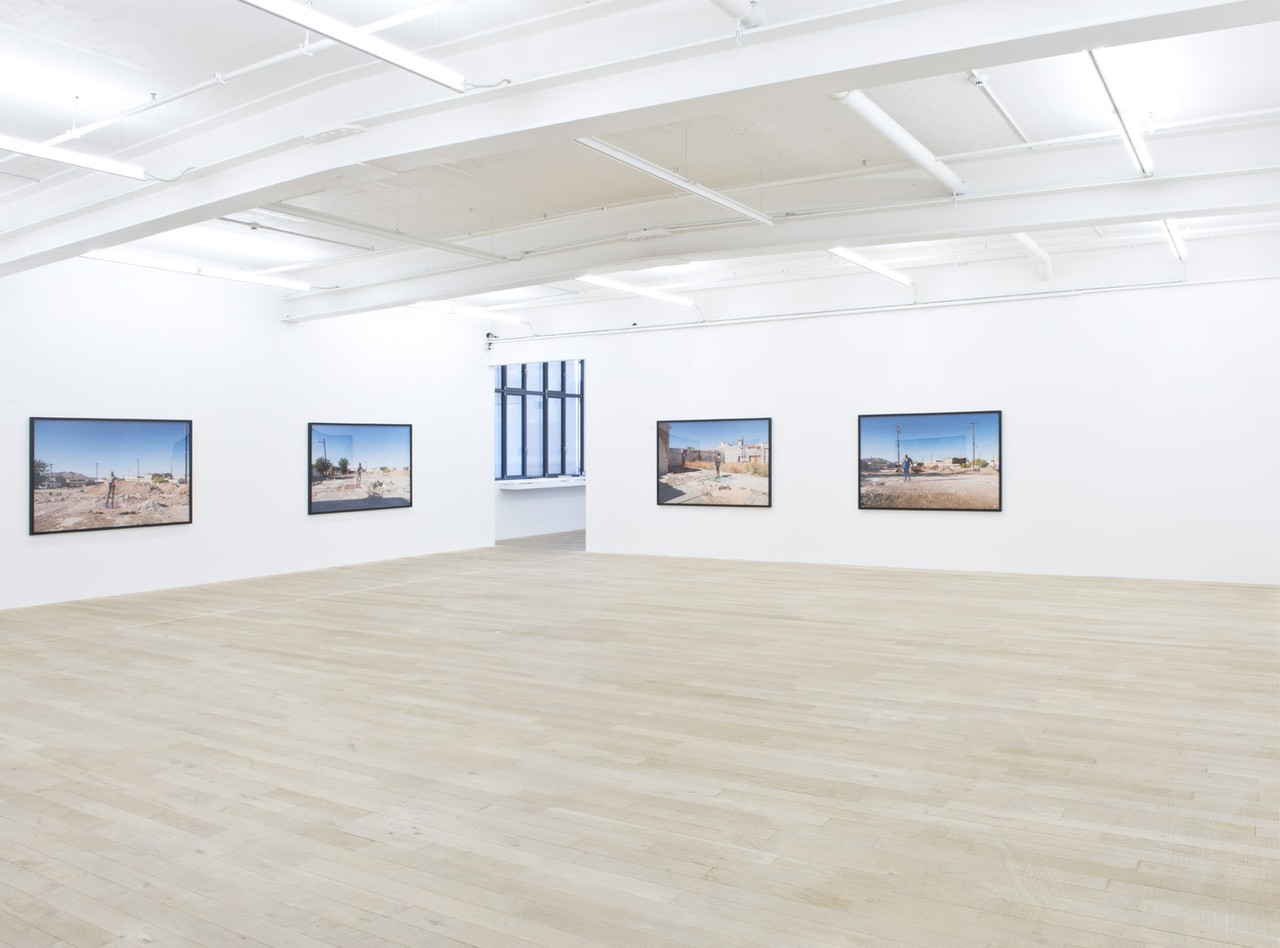 Galerie Peter Kilchmann is pleased to announce its upcoming solo exhibition with Teresa Margolles (b. 1963, in Culiacán, Sinaloa, Mexico). On view is a new series of photographs as well as three large sculptures made of architectural remnants taken from Ciudad Juárez.

Teresa Margolles has focused her artistic practice in the last decade on the Mexican city of Ciudad Juárez, one of the most important towns along the country‘s Northern border. The city has been tragically known over the last 20 years for the brutal murders of hundreds of women, known as femicide, and the subsequent state-sponsored impunity of the murderers. More recently, not only women but also other low-income residents have been characterized as disposable by the authorities, who have been trying to remove them from the city center. Ciudad Juárez has experienced several attempts to regenerate its city center since the 1990s. This process is densely connected to the circuits of global capital. The relocation of sex workers from downtown indicates a cleansing of society towards the trading of potentially valuable urban real estate, and is also linked to the violence that the whole country, and specially this city, has been suffering throughout the last decade. During the most recent phase of this process, numerous houses and establishments were either abandoned due to drug and violence-related pressures or closed down by the authorities. Many of them have been demolished, among others night clubs. On top of that, unemployment has soared and violence worsened. Thus, broken lives and spaces in this town are the product not only of national political processes and a sexist culture, but also of global powerful forces.

For the works in the exhibition Teresa Margolles has focused on transgender sex workers, bringing their individual stories in the spotlight. The artist worked closely with them in order to gain their trust, which allowed her to delve into the complexities and difficulties they experience daily. Apart from exclusion and discrimination, transsexuals in Latin America are exposed to a high rate of hate-related murders. Needless to say, the transgender sex workers of Ciudad Juárez are being pressed to leave the city center, as their usual working places are being demolished. Their efforts to remain downtown are efforts to survive and subvert the relocation plan that counts on profiting in the future from their disappearance.

In this complex scenario, Teresa Margolles deals with material fragments of buildings, transporting them across borders and reassembling them remotely in large format sculptures, as a call to read these traces as part of larger processes, events and social relations, such as migration, international drug trade, or human trafficking. On view in the show is a fragment of the dance floor from the "Lago Blanco" night club that was extracted from the demolished site. The floor has been reassembled and displayed on the wall (182 x 310 cm). Several mirrors that belonged to another night club in Ciudad Juárez were taken out and form now a sculpture (152.5 x 91.5 cm) displayed within the gallery space, titled "Espejos de la barra del bar RUV". Moreover, a large outdoors neon signs that reads "Mundos" (Eng. Worlds) has also been brought into the white cube as a sculpture. Almost 6 meters long, it alludes not only to life in Ciudad Juárez but also to the different worlds in which we live in - for instance, the conflicts and problems that divide two countries in a border region, or the inequalities between the elites and the urban poor. These three sculptures allow us to inhabit in a way the atmosphere of a partly dismantled town, as well as confront us with the realities and difficulties that people in downtown Ciudad Juárez are going through.

In the new series of photographs "Pistas de Baile", each print shows a transgender sex worker standing on the remnants of dance floors from demolished night clubs in Ciudad Juárez (9 photographs in large format, 125 x 185 cm., and 3 small format photographs, 45 x 64.5 cm). Their figures become part of a landscape in which ruins and devastation are the subject. Nonetheless, the proudly standing sex workers show us their best self, as if they were asserting themselves amidst both violence and destruction. We should not forget that both the artist and the sex workers were in danger while shooting these photographs. This ongoing project had its continuation in Manifesta 11 in Zurich (until Sept. 18), when Teresa Margolles dealt with the brutal murder of one of the transgenders, Karla, who was beaten to death on December 2015. Her murder is still unpunished.

Terrified into silence, or killed in the most brutal ways, people who have seen the worst of violence can no longer speak. Teresa Margolles has turned the demolished buildings into a sensor, for they can register and respond to influences and changes in their environment. The works in the exhibition focus on the sensations felt by objects, though the experiences of the subjects - transgender sex workers- are present as well. Buildings or spaces are not just ruins or crime scenes, but rather they structure and condition incidents and events.

Recent solo shows of Teresa Margolles‘ works include “We Have a Common Thread“ at the Neuberger Museum, New York (2015), which will be traveling to Colby Museum of Art, Maine (September, 2016), and to El Paso Museum of Art, Texas (2017). In 2016 she has participated in several group shows, such as the Woman Biennial in Ferrara, Manifesta 11 in Zurich, and LA‘s Public Art Biennial in Los Angeles, just to name a few. In 2017 she will have a major solo show at the Musée d‘art contemporain de Montréal. The catalogues are available at the gallery. Teresa Margolles is represented by Galerie Peter Kilchmann since 2002.
www.peterkilchmann.com/