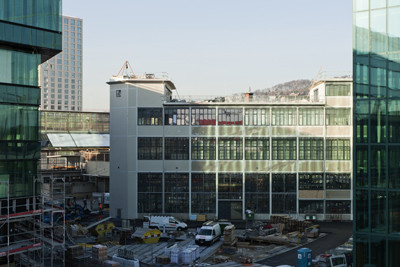 Galerie Peter Kilchmann is pleased to present its new spacious facilities with three single exhibitions. The new gallery space situates itself in the Diagonal building located on the Maag Areal, bordering on Zurichs highest building to date, the Prime Tower. The Diagonal building was erected as a work site in the 1940s with an architecture committed to the style of international modernism. The building, now under protection, reopens its doors after comprehensive renovations in the last year. While a restaurant occupies the ground floor, Galerie Peter Kilchmann shares the remaining floors with the gallery Eva Presenhuber.

With Francis Alÿs, John Armleder and Valérie Favre, Peter Kilchmann is pleased to present three artists who all also work in the medium of painting, yet have very singular positions.

Francis Alÿs, *1959
Toujours essayé, Toujours raté. N'importe. Essayer encore. Rater encore, Rater mieux. (Samuel Beckett, Cap au pire, 1983). On the occasion of last year’s solo exhibition at the Tate Modern and later at WIELS, Brussels – the last station of this exhibition will open at MoMA on May 8th, 2011 – Alÿs' long awaited piece Tornado (video, 55 min., 2000-2010) had its premiere. Every year since 2001, Francis Alÿs has eagerly awaited the month of March, the high point of the dry season, to drive to the shoutheast edge of Mexico City, where smoky clouds rise from cornfields burning after harvest, and grey swirls of ash and sand loom against the horizon. Carrying his video camera, Alÿs runs towards these tornadoes, hoping to catch them as a surfer catches a wave. Upon reaching one, he penetrates its thick brown walls until he reaches the peaceful eye of the storm, intending to stay as long as possible inside the swirl. (C. Medina, "Survey", Francis Alÿs, Phaidon, 2007). The artist used the long wait for the next tornado to do several paintings on paper, canvas or wood, which will now be exhibited for the first time. Francis Alÿs has been represented through the gallery since 1999.

John Armleder, *1948
John Armleder’s multifaceted work can be compared to an associative game of art history, which until today doesn’t deny its proximity to the aesthetic of Dada and Fluxus. As Maurice Denis suggested in 1890, ‘remember that before a painting is a war-horse, a nude woman or some story or other, it is essentially a flat surface covered in colors assembled in a certain order.' By way of updating this statement, and to describe John Armleder’s recent work, we should add that the forms do not necessarily have to be arranged in a certain order, the colors are often 'just as good as they are in the pot', and the story must not be scorned. The artist will design a space in the exhibit in which the walls are covered with a carpet of hards, a certain ingrain wallpaper, on which five large-format Drip paintings are then hung.

Valérie Favre, *1959
Valérie Favre emigrated to France when she was 18 years old. Paris became her home for two decades. She painted, took acting classes and received schooling as a filmmaker. 1998 she headed to Berlin and found her way back to painting. The work of the artist, who grew up in Evilard close to Biel, Switzerland, is full of narratives and countless allusions. “I am a painting writer” Favre described herself in an interview with Annka Karpowski (artnet, 24.02.11). Favre draws upon memories and mostly paints in series. Until now, nine such cycles have been completed. The Lapines (rabbit women) populate her canvases since 1999 and have a symbolic cosmos with the Lapines Univers. The alter ego figures, in which Favre also paints herself as a hybrid female figure with long rabbit ears, resemble comic figures, pin-up girls, as well as the triumphant woman stan ding on a pedestal on the company logo of Columbia Pictures. The Lapine Univers thus becomes not only an ironic self-perception, but also a kind of media-theoretic reflection. Apart from a selection of these series, the exhibition will also feature paintings from the Selbstmord-Zyklus (Suicide Cycle). This series spans a total of 70 pictures, which are all held in a format of 24 x 18 cm, and which all show suicide variations. In the search for new death motifs, Favre draws upon newspapers, old myths and legends, as well as the repertoire of the cinema of the 1960s.
www.peterkilchmann.com/