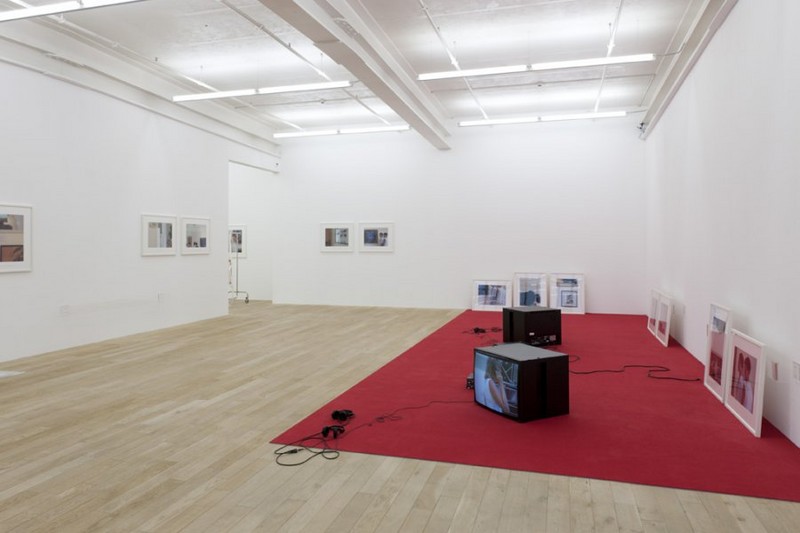 The Galerie Peter Kilchmann is pleased to present the first solo exhibition of Tobias Kaspar (born 1984 in Basel) in Switzerland. The artist lives and works in Berlin and belongs to a young generation of artists who use strategies of conceptual and appropriative art.
The exhibition shows the installation Bodies in the Backdrop (2012) which is composed of 20 color photographs, and a slideshow with separate sound, which was initially shown at the Halle für Kunst Lüneburg in early 2012.
Correspondingly, a catalog of the same name was published by Walther König Verlag, Cologne, and is now available at the gallery. The title, inspired by Elizabeth Lebovicis text about Ghislain Mollet-Viéville, points to the affective and economic relationships of tensions between collectors and other actors in the field of art. The photographs document a visit to the Peggy Guggenheim Collection in Venice and how heaviliy cropped, it’s main protagonist being a young girl and boy, different works and unknown visitors. These scenes are accompanied by quotes like “I especially hated people making love on my bed“ (see invitation card), or “I could not produce the sum necessary because all my money was tied up in trusts“ from Peggy Guggenheim's autobiography «Confessions of an Art Addict», which have already a strong narrative quality.
Especially for this exhibition Kaspar produced the bronze casting Converse, Mens 8 / Womens 10 / UK 8 / EUR 41.5 / 26.5 cm, R (2012) of the interior of a shoe and cut it into several small pieces. The various pieces are provided with a number system that theoretically would allow for a later reassembly. Shown on a pedestal, the bronze seems to have fallen apart and is spread out like rolled dice. The deconstructed shoe made of bronze works as a signifier for the structural meaning as identity creating accessoire. This turns the bronze to a method for a study on the delimitation of the subject. The juxtaposition between the medium and the represented shoe emerges as strategy of self-presentation, which deletes position and function, a strategy that can be applied also from outside.
On view are as well 20122TK1JEANS (2012) from the edition Tobias Kaspar realized with Little and Large Editions and launched in early 2012 at the Andreas Murkudis Store in Berlin.
Tobias Kaspar graduated from the Academy of Fine Arts Hamburg in 2011 and attended the Staedelschule in Frankfurt from 2009 to 2010. In 2011 he participated in the group show "So machen wir es" at the Kunsthaus Bregenz, where he showed the work Lumpy Blue Sweater (2010), a work which exemplarily shows how with three somehow to each other relating elements a net of content is constructed around it’s main piece: a blue sweater. The three components being a photograph of an André Cadere-work, held by a woman in a blue sweater, a monologue from the film The Devil wears Prada (2006) on fashion cycles between avantgarde and discount stores, analyzing fashion structurally as an identity-constructing strategy and the 18 chapter titles Guy de Maupassaunt's novel «Bel Ami» (1885), which trace the social advancement of the fictional character Georges Duroy. The titles indicate the third part of the net being gossip, which is used by Mr. Duroy for the creation of his new social identity.
2011 Kaspar exhibited in the group exhibition “How to Work” at the Kunsthalle Basel. The following year, he participated in the exhibition “Strange Interlude” at the Palais de Tokyo, Paris. Together with Hannes Loichinger he has conceived the travel guide The PROVENCE City Guide; Nice (2011), which was presented in “The Money Plot” with Egija Inzule at the Kunsthalle Zurich during the exhibition project “Human Valley” of Dominique GonzalezFoerster and Tristan Bera. The artist will open his solo show at Marcelle Alix at the end of November 2012. In early 2013, Tobias Kaspar will participate in the group exhibition "Frozen Lakes" at Artists Space, NY.
www.peterkilchmann.com/