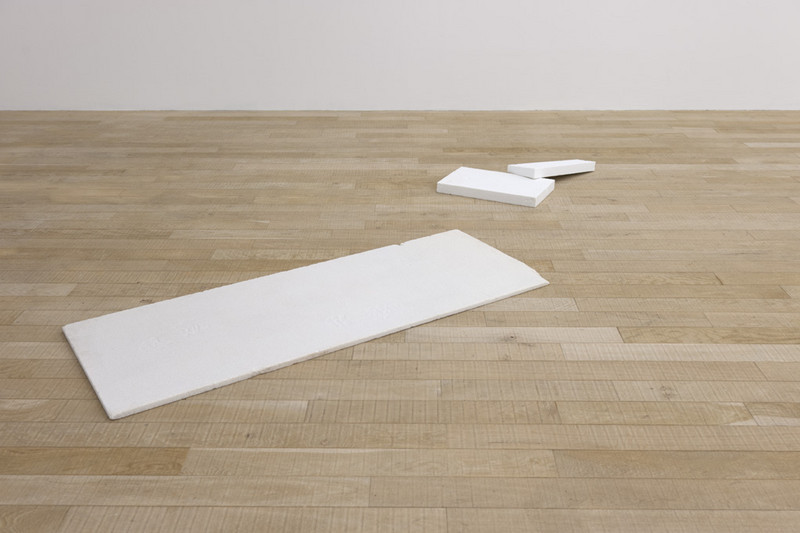 Installation view
VADIM FISHKIN, FERNANDA GOMES AND ANDREAS LOLIS
The things I want to express are so beautiful and pure
1 November - 21 December 2013

It is with great delight that Galerie Peter Kilchmann announces the group show with Vadim Fishkin, Fernanda Gomes and Andreas Lolis. The show is taking place in conjunction with the second solo show of the Mexican artist collective Tercerunquinto. Both exhibitions focus on works that are distinguished by their unconventional approach to art and institutional frameworks.
The title “The things I want to express are so beautiful and pure” refers to M.C. Escher’s (1898-1972) artistic ideas diverged from the classical themes in visual arts. This makes it difficult to classify his oeuvre in the usual categories.
Taking Escher’s exploration of impossible architectures and infinite constellations as a starting point, this show aims to present three different forms of sculptural practice that share this sense of irony, esprit and ambiguity.

Vadim Fishkin, *1965, Soviet Union, lives and works in Ljubljana. Fishkin has expanded on his artistic field so it includes all types of research and explorations. His sculptural works include light projections, altered ready-mades, light-bulb installations and helium balloons. Fishkin allows objects to have a metaphysical presence, often ephemeral. The artist uses this quote by René Daumal to describe his aim: “The door to the invisible must remain visible.” The work Unplugged (2011) shows the impossible; a light-bulb presents itself on a pedestal, the unplugged cable lying next to it – but nonetheless the light is inexplicably switched on. Another work, miss Christmas (2012) consists of a plain bucket of paint put in the spotlight. Fantastically, the shadow depicts a palm-tree growing out of the very same bucket.
In 2012, Fishkin has participated in group shows at Kunsthalle zu Kiel, Germany, the Art Gallery of Kosovo in Pristina, and the Shanghai Biennial. In 2005, he has represented Slovenia at the Venice Biennial, Italy. The new catalog “Light Matters” will be published shortly by Gurgur editions & Association DUM.

Fernanda Gomes, *1960, Brazil, lives and works in Rio de Janeiro. Her sculptures echo Brazilian Constructivism, and are more often than not found objects, which she joins through stacking or stringing. They are often small, unnoticed things or discarded furniture, which she restructures and partly paints – mostly white, so that the sculptures and installations merge with the existing surroundings. It is the friction between raw material and finished art objects that fascinates the artist. With great ease, Gomes links everyday perspectives with modern, conceptual and architectural approaches and thereby creates delicate works that are only seemingly arisen by chance and awake to life in specifically and playfully arranged situations. Several new sculptures will be on display in the show.
This year, Gomes will have a solo show at the Centre International de l’art et du Paysage in Vassivière, France, and currently participates in the Istanbul Biennial, Turkey. In 2012, she participated in the Sao Paulo Biennial, Brazil and in the Rennes Biennial, France. Recent solo shows include Museu da Cidade in Lisbon, Portugal (2012) and MAM in Rio de Janeiro, Brazil (2011).

Andreas Lolis, *1970, Greece, lives and works in Athens and is a sculptor working mainly in marble. The forms and materials of his sculptural installations seem to be easy recognizable as packing material, cardboard boxes, etc., but are meticulously crafted in marble. While they appear something “between a teasing simulacrum and an echo of the real thing”, as stated by Xenia Kalpaktsoglou in the catalog “Andreas Lolis. 21st Century Relics” (2012), the sculptures are a form of material exploration, perhaps from an unusual angle. Lolis expands the tradition of ‘trompe l’oeil’ artworks by extending the moment of deception and visual surprise. Acknowledging the true material provokes a cognitive disorientation of the viewer. His sculptures are no longer functional but alienated from what they are representing. This simple divide of ‘waste’ materials and their uniconic reproduction of ‘durable’ sculptures marks the sensual but also investigative and critical way of Lolis’ oeuvre. On show will be diverse new works in marble, either leaning against the wall (Untitled, 2013, 112 x 30 x 14cm) or lying on the ground (Untitled, 2013, 50 x 18 x 5 cm).

Lolis has participated in various group exhibitions e.g. this year at Palais de Tokyo in Paris, France, and was included in the Athens Biennial, Greece, in 2011.
www.peterkilchmann.com/