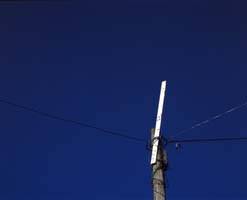 The Gallery Peter Kilchmann is pleased to present the latest works of North Irish artist Willie Doherty. The title of the exhibition, Empty, refers to Doherty ́s recent video installation which will be presented for the first time in the Peter Kilchmann Gallery in Zurich and at the same time in the Kerlin Gallery in Dublin.
Willie Doherty was born in 1959 in Derry (Northern Ireland) and is well known for studying places and scenes, which arouse fragmentary narrations. Doherty currently lives in his hometown, Derry, affected by the northern Irish conflicts. It is here where he normally finds his locations and photographic motives, as well as in Belfast. The locations in Doherty’s photographs have witnessed conflicts which are no longer visible. The photographs could be used as evidence to document these conflicts but might also contain narrative elements in which victims meet offenders at the same time. Willie Doherty accurately depicts and creates tension between reality and fiction by highlighting a certain detail, a mood or an irresolvable contrast.
His latest video installation Empty (2006) focuses on the facades of a disused office building. The camera scrutinises the external surfaces of this strange but familiar utilitarian building from dawn to dusk, throughout the course of a single day. The building appears to have been left as if someone had turned off the lights and didn’t come back. Its abandonment is revealed by glimpses of dusty interiors and by the peeling blue paint that covers the entire building. The stillness of the edifice is interrupted by the shifts that accompany the transition from dark to light and from rain to sunshine. These imperceptible but at times dramatic changes animate the blue skin of the building. The empty shell resonates to the soundtrack of layered ambient sounds that refer to the immediate surroundings and also evoke echoes of past stories and events. The darkened windows reflect the spectacular game of dawn with clouds moving across the constantly changing sky. Here we receive a new perspective in which the contradictions of nature and urbanity and their shifts in time form an amazing unity. This contradiction appears to be confirmed by its immensity, independence and weightlessness. The anonymity of the building as well as the things that we can imagine that might have happened within their walls, get lost in the mood that arises through the video.
Doherty’s video installation captures the viewer through the quality of the images and the clear camera work. His works Closure (2004) and Non-specific Threat (2004) have been drawing attention for the last few years, for example with the Venice Biennale, 2005. They demonstrate an extraordinary level of sound as well as a confident handling of moments of agitation and stillness. The projections of these films create a unique perception of space and time. The stories with their constant repetitions, with neither beginning nor end, entice us into contemplation, but they also submit us to the inspection of the subtle difference between fiction and reality.
Together with Empty, Willie Doherty has created two series of photographs, which carry the titles Show of Strength (2006) and Local Solutions (2006) pursuing the same theme. They are the collective titles of a group of new photographs exploring the continuing ghettoisation of post-ceasefire Northern Ireland. In both series the camera is directed towards an open view of the sky. However, the open view is split up by certain details such as an antenna, a spotlight or a pylon. Their real identity mostly remains secret, if the context of the picture is not known. The series of images called Local Solution puts focuses on barred lamps and surveillance cameras, whereas in Show of Strength we perceive the political connection with the long-lasting conflict in Northern Ireland. They play upon the tension between the expansive imagery of blue skies and the demarcation of territory by self-made flagpoles and surveillance cameras. A hoisted banner as a symbol of political affiliation has been an explosive statement within the social context of a city like Derry. These problems currently continue to be generated within the context of Northern Ireland, and at the same time remain a reflection of our handling of general frontiers and controlling the hope of being free. The beautiful but poignant photographs embrace the optimistic abstraction of modernist photography and the cynicism of tourism and political spin.

The artist will be present at the opening. For more information, please contact Annemarie Reichen via phone
+41 44 440 39 31 or write an email to a.reichen@peterkilchmann.com
www.peterkilchmann.com/