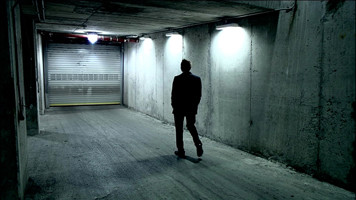 Three Potential Endings is the title of the forth coming solo exhibition of Willie Doherty (born 1959 and currently living in Derry, Northern Ireland) and at the same time the name of his new film, which will be shown on the occasion of his exhibition for the first time. This will be the artist’s sixth exhibition in our gallery.

Three Potential Endings was shot on location in Dublin during the summer of 2008.

The work is structured around three open-ended sequences involving a businessman who finds himself outside of the familiar surroundings of the office. The work does not provide any explanation or rationale but rather places the man in direct confrontation with the architectural spaces where he finds himself. The work presents a figure besieged with the possibility of failure and uncertainty.

The three sequences are simultaneously fragmented and connected by a fourth sequence that shows the man pacing around a small, confined space. It is unclear whether he is lost in thought and deep in concentration or whether he is confused and oblivious to his surroundings.

The figure appears to be both contained by the parameters of each space yet free to leave. The resolution of any possible narrative recedes and the focus of work shifts to an awareness of the vulnerability of the body in space.

Three Potential Endings extends the concerns of previous works, such as Closure, 2005 and Passage, 2006. Like these works Three Potential Endings developed out of an investigation into the spatial and socio/political conditions of specific urban locations and deploys the intervention of the human figure to explore the dynamics of these spaces. (Willie Doherty, December 2008)

In addition to the film, a series of photographs will be on display.

For the past 15 years, Doherty’s representations of the political situation in Northern Ireland have made him one of the most consistently interesting and affecting artist. In 2007, his first retrospective with video installations took place in the German-speaking area of the Kunstverein Hamburg and Lenbachhaus Munich. An extensive catalogue about these exhibitions has been published in German and English by Hatje Cantz Verlag and is also available through the gallery.

The artist will be present at the opening. For press enquiries or any further information, please contact Annemarie Reichen by telephone: +41 44 278 10 10 or by e-mail: a.reichen@peterkilchmann.com

In the second space of the gallery will be simultaneously the opening of new works by Teresa Margolles
www.peterkilchmann.com/