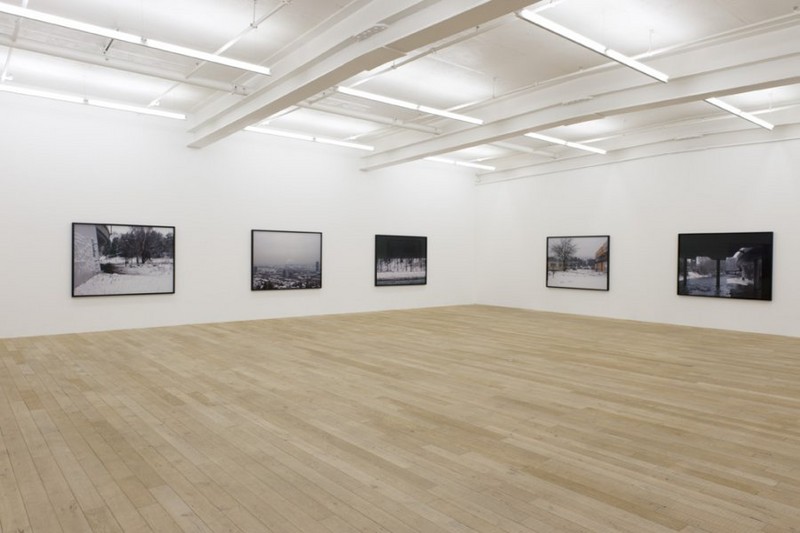 It is with great delight that Galerie Peter Kilchmann announces the upcoming solo show “Without Trace” by Willie Doherty. The collaboration with Willie Doherty exists from the gallery’s very start. This is his eighth solo show in the gallery. The artist was born 1959 in Derry, Northern Ireland. Today he lives in Donegal, Ireland. “Without Trace” is the world premier of a new body of work by Willie Doherty, filmed and photographed entirely in Zurich.
It is a rare occasion that Willie Doherty has realized a body of work outside of Northern Ireland. In addition it is the very first time that he has focused so intently on snow, the presence of which receives an almost mystical connotation in his new film Without Trace (2013). As the title suggests, all traces disappear in snow, obliterating the distinction between past and present. The reference may also be linked to the current political situation in Switzerland. The screening of the 20-minute video work (Ed. of 3) is accompanied by a series of 11 large color photograph C-prints, such as Into Thin Air (Invitation card, 120 x 160 cm, Ed. of 3, 2013). The photographs show a contemporary Zurich, which acknowledge a temporality without being defined by it. The singular images alone already tell stories of the tensions between massive architectures and unruly nature; scenes in which practically all traces of single persons have been erased.
In his essay “Tradition and the Individual Talent”, T.S. Eliot writes about the simultaneity of historical past and contemporary present in works of great art, naming it a “historical sense”. The author describes it as “a sense of the timeless as well as of the temporal and of the timeless and of the temporal together [...]”. It is this feeling, that of many stories that are happening instantaneously, swirling together and separating incessantly, that is present in the video and photographic works of Willie Doherty. Since the 1980s Willie Doherty’s work has been informed by the complex history of his hometown Derry and the conflicts between Protestant unionist and Catholic nationalist communities in Northern Ireland. Creating works abroad, during a DAAD-residency in Berlin, or for Manifesta 8 in Murcia, Spain, he has carried this acute historical awareness with him.
It is with this approach that Willie Doherty recently engaged with Zurich, gathering visual impressions and observing historical attributes during several trips to the city. The resulting works structure the collected findings in a new order and ascribe them a new significance. The rivers Sihl and Limmat play an important role, as does the continuing shift of the city’s periphery. An ambivalent play with reality and fiction informs Without Trace, in which the slowly panning camera follows the city’s streams, rivers and suburban developments. Willie Doherty guides the camera’s eye to capture the city’s movement and standstill, going beyond the clandestine outskirts of Zurich and the margins of the city.
With this exhibition Willie Doherty follows up on his recent video work Secretion, which he produced for the Documenta 13. Shot in and around Kassel in the winter of 2011, Secretion draws upon the possibilities of lost and forgotten narratives located somewhere between recent history and a near future, echoing other video works by Willie Doherty such as Non-Specific Threat (2004), Closure (2005), or Ghost Story (2007), which was shown at the Venice Biennale in 2007. Works by Willie Doherty are currently on show at exhibitions at the National Gallery of Denmark SMK, Copenhagen; Tate Britain, London; and Fotomuseum Winterthur. Willie Doherty will be participating in the City of Culture festival in Derry-Londonderry in October 2013. Catalogs available for purchase through the gallery include Disturbance, published by The Hugh Lane Gallery, Dublin, 2011; Buried, published by The Fruitmarket Gallery, Edinburgh, 2009; and Anthology of Time-Based Works, published by Kunstverein Hamburg, Städtische Galerie im Lenbachhaus and Kunstbau München, 2007.
www.peterkilchmann.com/