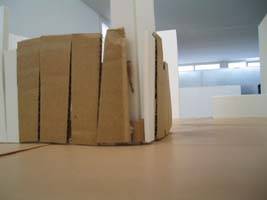 Opening: Friday, 25th August 2006, 6 - 9pm
Opening of all galleries and institutions in the Löwenbräu Building
and a summer party afterwards.

The Peter Kilchmann Gallery is pleased to announce the fifth solo exhibition by the Swiss artist Zilla Leutenegger (*1968, Switzerland. Lives and works in Zurich). The artist shows four new video installations and drawings. In the context of this exhibition, the artist not only deals with the exploration of the moving figure in the dimensions of space and time, but she also displays human gestures while waiting, explores light as ephemeral material and analyses the relation between subject and object. Apart from her two-dimensional drawings, moving images are an integral ele-ment of her video drawings and digitally manipulated animations, which are frequently combined with three-dimensional objects or mural painting. Since the mid-Nineties Leutenegger has not only featured herself or a female alter ego, but beyond that, she has also referred to the cultural constructions of the self in the 21st century. Thus, Leutenegger finds herself on a constant search for pictures of daily courses of motion as well as situations of ab-sence and presence, which she can convert graphically and spatially.

Prada (2006) – In the centre of the gallery room a mirror is leaning against two columns. By means of a rear projec-tion, a young woman in a fashion shop can be observed. With the odd moment of stopping from time to time, she is trying on various dresses and accessories – the distillate of an action in the daybreak in a Prada shop in Tokyo, the glass architecture of which was constructed by the Swiss architects Herzog & de Meuron. With this action, Leute-negger fulfilled herself a popular dream of many women during a stay in Japan. The result, however, is a video showing rather non-glamorous gestures and poses of the female protagonist when dressing and undressing, linked with moments of pausing. She stares at her shoes, looks at her trousers. Due to the reflection in the mirror, the viewer is an integral participant of the seemingly transparent video projection and extends the constructed space with his/her presence. Some sequences of the video work are technically alienated using a kaleidoscope effect, whereby the disillusioning of the dream is strengthened. The word "kaleidoscope" originates in the Greek language and, literally translated, means "beautiful picture onlooker". The Prada glass tower resembles a split-up view through a kaleidoscope due to its cladding consisting of hundreds of different pieces of glass. Interestingly, the Prada palace is located in Tokyo’s shopping area Aoyama – a specific place reflecting the culture and values of our mass-consumption society. There, shopping can be observed as a public ritual, leisure activity and entertainment, or citing Barbara Kruger: "I shop, therefore I am" (1967).

Lucellino (2006) means in Italian: small light. The so-titled work consists of a mural painting of black lines combined with a projected video drawing onto the wall. A young woman only dressed in a brassiere, black trousers and a black hat, is sitting on the floor (seen lateral), repeatedly pushing a black hanging lamp away from her. The black lines painted on the wall represent the movement of the lamp and are static. However, the moving light cone is dynamic, which suggests the real movement of the hanging lamp. The described situation is generated by the repetition of a minimum gesture, which opens a specific space and makes time accessible for the visitor. In her motion studies, as she calls them herself, the artist uses repetition as a stylistic medium to intensify time in one of her constructed spa-tial situations. This situation apparently freezes an autistic moment, which shows a young woman in a non-narrative context. Leutenegger considers spaces as organisms with their own “space life” and provides these with a date of expiry (e.g. for the duration of an exhibition, time spent by the viewer).

A cone of light by a torch is searching and moving slowly over the wall. This scene is part of the video installation entitled torch (2006). On closer examination, the projected words "Zilla was here" appear letter by letter in the round looking light cone of the torch. The projection of the torchlight is coming out from a real torch, which is placed on a 2-stairs construction. Leutenegger broaches not only the ephemeral character of light but also the self-referring mo-ment as the work refers to the presence of the artist in the past. The words function on a semantic level as a locum. It seems as if Leutenegger has left a trace in form of an extended signature, which is not detectable in its entireness, but searching and approaching for their existence again and again.

The video projection Der unendliche Raum / The infinite space (2006) concerns itself with an analogue interpreta-tion of the Closed Circuit procedure. Onto the wall a picture of a wall break-through is projected, which opens a fur-ther digitally constructed gallery space. There, the artist can be seen at moving through the room and waiting for something or somebody. The act of waiting is unmistakably demonstrated via the gesture of checking the time and by her walking back and forth. Apparently, the protagonist is bored by her waiting, a situation which will be only tem-porally experienced, depending on the time the viewer will spend here. In the wall, another break-through is visible that shows the same waiting person in the gallery room and so on. This multiplying of space into the infinite is tech-nically realizable by means of a simple construction of two mirrors hanging opposite of each other. However, the crucial point is: The artist is reflected in her medium and thereby, reflects her work. Since the 70s, the Closed Circuit procedure was repeatedly the subject of artistic works and shaped, among others, the works by Dan Graham and Bruce Nauman.

Furthermore, a series of differently sized watercolour drawings are displayed, presenting pieces of furniture. The furniture are taken out from the house of the artist and function as prototypes linked with their historical context. Thus, Leutenegger – following her topic logic – not only focuses on the moving figure within a space but also on furniture as flexible element in an apartment. In the context of her last solo exhibition "Wichtiger Besuch (Important visitors)" (2006) in the Saarlandmuseum, the exhibition area was divided in different rooms of a suggested house where the works were distributed and the visitor was invited to walk around. There, the drawings or projected furni-ture were only adumbrated and rather served for allocation of the living spaces. Here however, they turn out to be the definite objects of the artist’s investigation, ignoring the relationship of subjects and objects. As Jean Baudrillard demonstrated in Le système des objets (1968) before, the allocation of the objects and thus their subordination un-der the control of the subject can be seen just as in reverse, i.e. as creeping authorization of the object over the sub-ject. The facility elements of modern apartments correspond to order systems, which place the subject only in a clearly arranged object structure.

The artist will be present at the opening. For more information, please contact Claudia Friedli via phone
+41 44 440 39 31 or write an email to c.friedli@peterkilchmann.com
www.peterkilchmann.com/