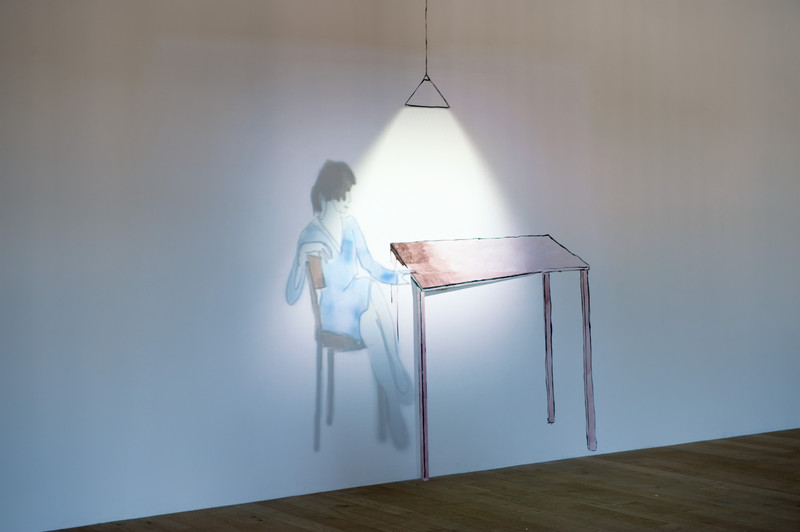 Rock the chair is Zilla Leutenegger’s seventh single exhibition at Galerie Peter Kilchmann. The artist is presenting several new video installations and video drawings, three of which are created for this show. The installation and video works in the exhibition are complemented by a number of new drawings. Zilla Leutenegger was born in 1968 in Switzerland. She studied at the University of the Arts Zurich and lives and works in Zurich.
There is a table and a chair. There is also a person, not really sitting on the chair, but rather leaning back on the rear edge as far as possible. The chair is slanted, and she steadies herself by holding onto the table (Rock the chair, 2011). How far can she lean back without the chair tipping over? The tipping point is something inherent to the works of Zilla Leutenegger. Like an ambigram the pieces shift in the viewers’ perception. Take two steps to the right, and suddenly the black lines on the wall are recognizable as the continuation of the chair already sticking out partially (First seat, 2011). The tipping point might occur when you look at a wall drawing of a bubble chair and suddenly realize that you are actually looking into a room through a rain-streaked window. In reality, that painted hanging chair is moving, kept in motion by the person sitting inside, who absentmindedly pushes herself off the ground every so often (New York, 2010).
These are no wild worlds, which Zilla Leutenegger presents to her audience. Instead, the persons, who act for themselves and are unaware of any viewers are the focus of Zilla Leutenegger’s works. This becomes increasingly clear in the drawings, in which the artist captures small gestures and actions of her own daily routine. For Zilla Leutenegger, the medium of drawing functions through its directness. Armed with a pencil and a piece of paper, the observer Zilla is bound to an immediacy and spontaneity apparent in every line. Zilla Leutenegger dissects the boredom of everyday life and extracts single moments, which develop an unexpected poetry when seen separately.
The installations can be thought of as the continuation of the drawings in three-dimensional space, breaking through the barrier of the wall. However, we are still confined to consolidate structures. In the exhibition this is made clear by placing all scenes in a domestic setting. There is a kitchen (Marcia’s Kitchen, 2011), a bedroom (Vollmond, 2008) and a living room (Forever can begin, 2011) – the mundane life stands contrary to the suggested adventure. Thus the title of the exhibition might well be read as a challenge to stir things up every now and then: Rock the chair!
Galerie Peter Kilchmann has represented Zilla Leutenegger since 1998. Recent single exhibitions include the following: “More than this. Werke aus der Sammlung Goetz”, Weserburg, Museum für moderne Kunst, Bremen, 2011; Zilla und das 7. Zimmer, Kartause Ittigen, Kunstmuseum Thurgau, Warth, 2008; Bienvenue!, Centre d’Art Passerelle, Brest, 2008; Meet me in the Library (9 P.M.), CCA Center for Contemporary Art, Tel-Aviv, 2007; Wichtiger Besuch, Saarlandmuseum, Saarbrücken, 2006. Among others, the following collections are in possession of works by Zilla Leutenegger: Centro Galego de Arte Contemporaneo, Santiago de Compostela; Museion Museo d'arte moderna e contemporanea, Bolzano; FRAC Lorraine, Metz; FRAC Champagne-Ardenne, Reims; Kunstmuseum Basel, Basel; Kunsthaus Zürich, Zurich; Sammlung Goetz, Munich.
www.peterkilchmann.com/