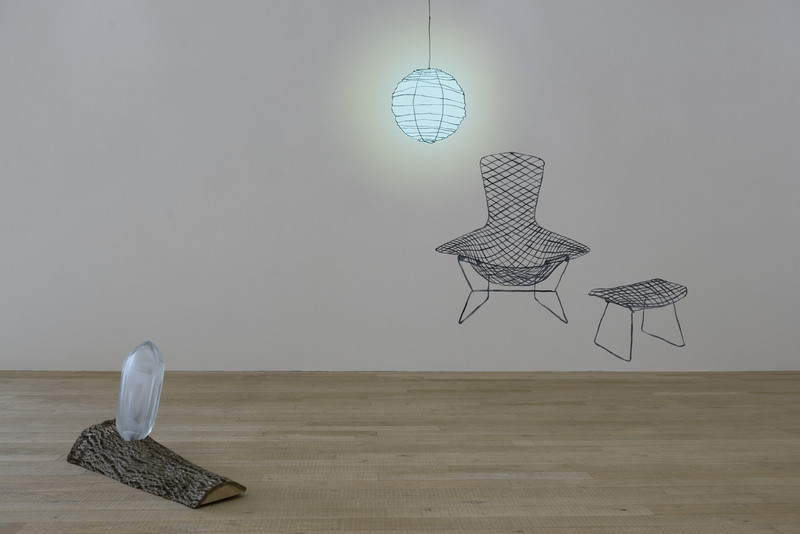 Galerie Peter Kilchmann is pleased to present with “Moondiver” the eighth solo exhibition of the Swiss artist Zilla Leutenegger. She will be presenting new works that primarily deal with the interplay of colors and shapes. The recurring coexistence of video installation, sculpture and drawing in her oeuvre will once more be the central focus, seizing two essential themes such as the combination of colors and shapes and the “moving line in space”, prolonging the medium of drawing into the third dimension. These constellations are being reconciled playfully and with the utmost ease by the artist. Leutenegger depicts random moments of unexcited everyday situations in a poetic way full of atmosphere.

Of the same title than the exhibtion is the work “Moondiver” (2015, video installation with wall drawing, 1 projection, color, sound). The wall drawing of a building crane is accompanied by a video projection. Their interaction vivifies the drawing to the point where the crane seems to be provoking the movement of the projected moon that is rising and falling while continuously changing its color.

Further, the work “Bird Chair” (2015, video installation with wall drawing, 1 projection, color, no sound) will be on show, a recurring motif of the famous designer chair by Harry Bertoia (1915-1978). This new work consists of a frontal view of the chair and a lamp, both as a wall drawing, and the projected light of the lamp.

Besides new drawings on paper, two sculptures of rock crystals as well as a monotype of the format 140 x 100 cm crafted by using lithographic block print, another large size videoinstallation in the form of a mobile are on display. “Mobile Z” (2015, video installation with 1 mobile, 1 projection, color, no sound) consists of several colored letter fragments of balsa wood delicately arranged and balanced in a hanging construction. Due to the marginal weight of the wood, the hanging bars of the mobile are set in motion by the slightest breeze. An artificial shadow is projected onto the mobile and the wall behind it, superimposing the natural shadow of the mobile. The interplay of these two shadows seduces the viewer into various realms of visual and sensuous perception.

Another multimedia installation or rather media collage titled “Casa Fernando” (2015, multimedia installation with wall drawing, photography, 1 video projection, color, sound) opens up a perspective of Paulo Mendes da Rochaʼs building Casa Fernando in Sao Paulo. Displayed on the facade is the animated shadow of a tree and a human contour walking to and fro and sometimes out of sight. The scene is complemented by lively birdsong.

Zilla Leutenegger was born in Switzerland in 1968. She studied at the University of the Arts in Zurich, and lives and works in Zurich. Important exhibitions include her participation in the Biennale of Sydney 2014; solo exhibitions at the Museum Franz Gertsch in Burgdorf and the Museum Morsbroich in Leverkusen, both 2014 and accompanied by the catalog “Fairlady Z”, published by Verlag für moderne Kunst Nürnberg. In 2015, Leutenegger will be presenting her solo exhibitions “Ring My Bell” at the Pinakothek der Moderne in Munich (from June 26) and “Exhibition Z” at the Wolfsberg (UBS) in Ermatingen (from March 18). Both exhibitions will be accompanied by a catalog.
www.peterkilchmann.com/