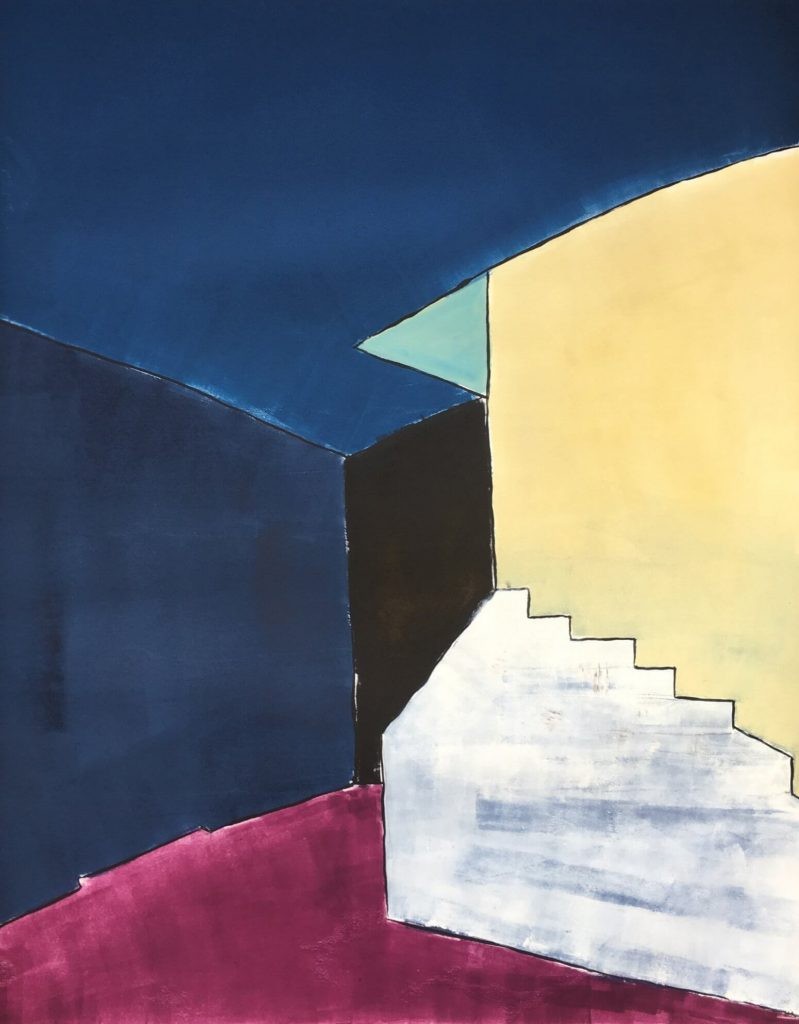 When I wander around my apartment at night, I am filled with a deep sense of peace in our otherwise very bright and loud world. I am interested in how light penetrates the night and how a familiar piece of furniture appears at this very moment.
Zilla Leutenegger

Galerie Peter Kilchmann is pleased to present a new series of monotypes by Swiss artist Zilla Leutenegger in our project space. Zilla Leutenegger was born in 1968 in Switzerland and is known for her distinct drawings and her video installations. With a new series of monotypes the artist entered a surprisingly unusual territory in the fall of 2016: invited by the Bündner Kunstmuseum Chur and specially developed for the opening of the museum‘s new extension, the exhibition entitled Tintarella di luna allowed us an insight into a poetic group of large-sized dark-colored interiors, which she has now developed further for the gallery. On view in the project space is a selection of 14 large-size works hand printed on cotton paper, which once again lead us to a silent world of nocturnal interiors.

Lights out is the moment when everything goes to sleep, when the twilight hour has passed and night wraps itself around our perception like a finely woven cloth of dark blue velvet. An interplay between surfaces, light and dark shadows. Sleepwalking and drifting, but curious, we stand in front of the Perfect night (56.5 x 92 cm) and see a luminous yellow trapezium of moonlight trespassing the open window on the left and shining in the center of the room. A plain bed, a chair glow in the pallid moonshine. Dynamic lines are replaced by the calm, dim surfaces applied by the hand press, which here and there are interrupted by color accents. Sharp outlines of pointed angles and edges are softened or swallowed completely by black shades. On the other hand small details and the pieces of furniture, that appeared insignificant before, come to the fore contrastingly; just as the white armchair in Loneliness 2017, (91 x 56.5 cm). Depending on the projection of light, absolute shadow also occur. In Black beauty (92 x 112 cm) we are dazzled by the bright window in the right upper corner, while the furniture in the foreground almost entirely disappears in nocturnal obscurity; and the carpet is just barely distinguished by its gentle outline.

The spaces themselves are the protagonists of Leutenegger‘s monotypes. The works Blinky Palermo (92 x 113 cm, see invitation card) and Studio Palermo (92 x 56.3 cm) lead us perspectively into the depth of the respective spaces by means of plain composition lines and allow us to explore the nature of the architecture through the moonlight. Simultaneously, the silent loneliness of the spaces holds something very intimate, almost mystic. Every step we take through the unknown darkness of Leutenegger‘s interiors could put us in the position of an involuntary observer, who hidden by the protection of a dark corner becomes the witness of a private scene. What lies at the end of Black corridor (91.5 x 56.5 cm)? Only a pale glow can be seen through the narrow slits of the blinds of the window on the left wall. Between the dark elevated walls, a pale glowing floor leads us into endless dark depths. Finally, we discover that the rooms are not completely empty, when the artist allows in Pleated Skirt (86 x 69.5 cm) a female protagonist, her alter ego, to appear as an umbral but familiar detail.

In 2016 on occasion of the exhibition Zilla Leutenegger: Tintarella di luna at the Bündner Kunstmuseum Chur a monographic catalogue with the same title was published. A further major solo exhbiition took place the same year at the Museé Jenisch, Vevey, Switzerland. In 2015 the Pinakothek der Moderne in Munich, Germany presented the solo show Ring my Bell (cur. Inka Greave Ingelmann). Also in 2015 the solo exhibition Exhibition Z took place at the Wolfsberg UBS, Switzerland. In 2014 it was possible to visit the solo exhibitions At night at Centro de Arte Caja de Burgos CAB, Spain, as well as Fairlady Z at the Museum Franz Gertsch in Burgdorf, Switzerland. In the context of the latter a catalogue was published by Verlag für Moderne Kunst Nürnberg. Another highlight of the same year was also Leutenegger‘s participation at the Sidney Biennial. Her works are currently exhibited in the group exhibition Ewige Gegenwart in the Graphische Sammlung ETH, Zurich, Switzerland through April 17.
www.peterkilchmann.com/