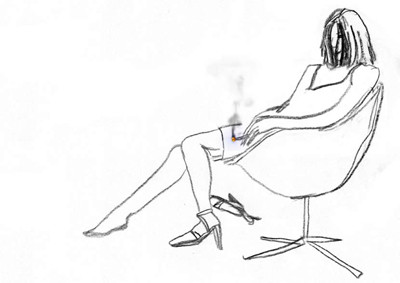 Galerie Peter Kilchmann is pleased to present two solo exhibitions by a female and a male artist who are very different at first sight but who have a lot in common if we take a closer look.

When comparing the two artists, we have a woman called Zilla Leutenegger, born in 1968 in Switzerland, who lives in Zurich and Jochen Kuhn, born in 1954 in Germany, currently living in Ludwigsburg near Stuttgart. He is a professor at the Baden-Württemberg film academy.

Both artists studied fine arts: Zilla Leutenegger at the Zurich University of the Arts and Jochen Kuhn at the University of Fine Arts in Hamburg. During their studies both artists already showed a strong interest in film, or rather in video works, without dismissing drawing and painting. Both work with animation. Jochen Kuhn's technique consists of filming works of art - mainly paintings - which he constantly paints over or afresh. He cuts them into pieces or glues them on top of each other. Zilla Leutenegger combines videos with wall and paper drawings. On the technical side, she crops the relevant scenes of her video within a so-called "green box" in the studio. She then projects the morphed video onto the wall or paper drawings and thereby complements her mostly installation-based works. Sometimes the artist completes her installations with objects or sculptures which serve to enlarge the wall drawing within the space.

Both deal with fictitious, everyday issues. Jochen Kuhn's protagonists are mainly men that are similar to himself whereas Zilla's protagonists tend to be females resembling herself. However both artists would prefer not to see parallels between the protagonists and themselves, but justify the use of their own personalities as a mere matter of convenience. They serve as patient, always available and thus ideal models for their works.

Zilla Leutenegger has produced several new works of art for the exhibition which can be interpreted as individual scenes or chapters of a bigger entity, while also standing alone. The connecting element is a person who is either at home, (At Night), in her studio (Studio) or in the swimming pool (Endless Pool). The figure is busy carrying out the tasks of everyday life and does not try to tell a story. As the exhibition's title Off The Wall suggests, the artist, in addition to her video projections as well as wall and paper drawings also includes objects and sculptures within her show. Zilla Leutenegger prefers her works to be read as a sequence of images rather than as a film. Most of the time she does not use language but ambient noise.

We are also pleased to present Jochen Kuhn's recently finished film Prediger (Preacher), projected on a large scale. This presentation is going to be complemented by scenic paintings on canvas and wood that deal with the film (see the picture on the invitation), in the adjoining room. The film’s subtitle is Elegy about the enunciators of higher truths. If we took the word ‘elegy’ to mean a ‘dirge’ and added a dash of wit, then we would come very close to understanding what this new work of art is about. The film shows us mostly elderly men posing as enunciators or executives that have to announce something unpleasant to a blurry crowd. The film, which was first shot with a video camera, is accompanied by classical music (mainly violin) and does not need any spoken or written words. It raises many questions, but answers only few of them. The topic fits very well into these times of economic crisis.
www.peterkilchmann.com/