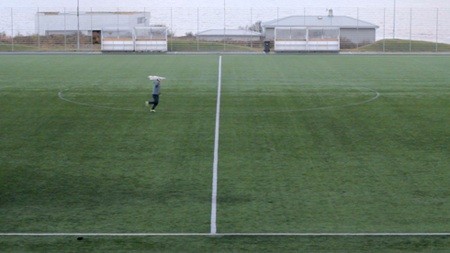 This exhibition explores several notions of internal conflict categorized by social, political and technological attempts toward resolution. Selected video works tackle the lingering effects of conflict and the difficulty with solving issues that are folded into the fabric of present day culture.

Kota Ezawa's self-described form of video archaeology takes shape in Take Off (2013), a digital approximation of a watercolour paper animation depicting the television broadcast of George W. Bush's final exit from the White House in 2009. The network moment is wrought with symbolism: the transfer of power, the promise of change at home and abroad.

Bjørn Melhus' video I'm Not the Enemy (2011) delves into the world of a war veteran suffering from Post-Traumatic Stress Disorder. The home becomes alien and family members embody the demons against whom the veteran has to fight. Appropriating dialogues from Hollywood movies that deal with the legacy of the Vietnam War and firmly implanting them amongst quiet German suburbs, I'm Not the Enemy cuts open the ways in which a society engaged in war deals with the guilt of problematic homecomings. This work is accompanied by a 2 frame looped video by Melhus entitled Policia (2007) depicting a continuously hovering police helicopter.

Klængur Gunnarsson's video Untitled Trip (2010) hints at repetitive and futile elements of conflict - internal and international. Shot in the artist's home city of Reykjavík, the work positions a running figure on the geometry of a seaside soccer pitch, evoking an obsessive and relentless back and forth across boundaries of land and air.

Daniel Froidevaux and Elisa Gonzalez' documentary video installation The Quiet Zone (2013) is a look at a remote region of West Virginia called the National Radio Quiet Zone, a government mandated radio quiet area that is home to the world's largest steerable radio telescope, and is attracting a community of people who believe they suffer from Electromagnetic Hypersensitivity. The Quiet Zone offers a space to contemplate a tenuous connection between the telescope and a community attempting to minimize the pervasive influence of technology, calling into question perceived notions of quiet in the digital age.