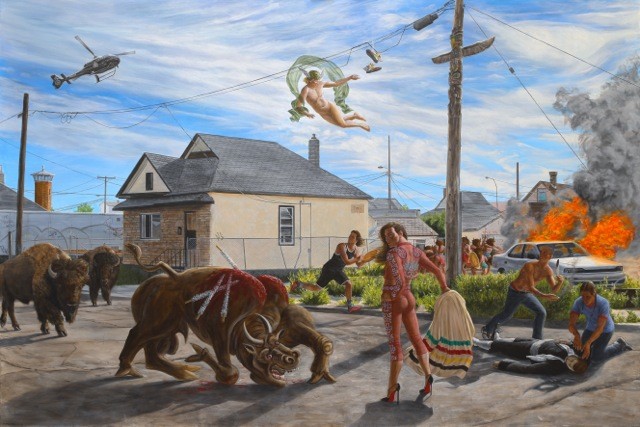 Monkman has recently cast Modernist figurations (Picasso, Bacon, Moore) in his representational paintings as casualties of violence and disease. Both Picasso and Bacon created their figurations based on personal experience with the gruesome violence of war. The two dimensional quality of Picasso’s distorted cubist figures, and Bacon’s mutilations seem heightened in contrast to the sensual figures that Monkman has claimed from various influences in art history.

In Monkman’s work, the Modernists’ flattening of pictorial space functions as a metaphor for Modernity’s compression of indigenous cultures. Inspired by old masters’ sensitive depictions of grief and lamentation, Monkman’s “Casualties of Modernity” are mourned or aided by young urban indigenous people. A generation of disenfranchised youth extend their condolences and empathy toward the less fortunate.

Kent Monkman just received the Hnatyshyn Prize for excellence in the visual arts and the 2014 Indspire Award. His work can be seen currently in the United States at the Sante Fe Site Biennale until January 2015 and in France at the Musée d'art contemporain de Rochechouart until December 15.
www.pfoac.com