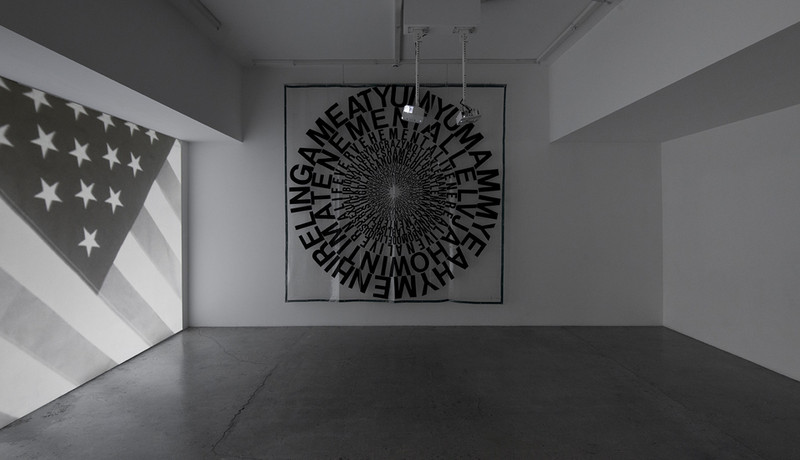 Cherry and Martin is pleased to present the first West Coast solo exhibition of German artist Ferdinand KRIWET (b. 1942). The exhibition will include KRIWET’s filmic works (sound-picture-collages), Apollovision (1969/2005) and Campaign (1972-73/2005), as well as the hanging serigraphic piece, Text Dia (1970).

KRIWET is pioneer in modern media art. In 1961, at the age of 19, KRIWET published his first book work, ROTOR, a text without capitalization or punctuation: his first foray into the idea that art is information and information is art. Well aware of figures like Yves Klein and John Cage, Kriwet was in communication with the important Düsseldorf dealer Jean-Pierre Wilhelm and his Galerie 22. KRIWET took a space in a building with Zero group artists Heinz Mack, Otto Piene and Günther Uecker, and despite his youth, throughout the 60s, produced groundbreaking theater works, sound pieces and performances. KRIWET also made moving image works in conjunction with the Studio für Elektronische Musik (WDR, Cologne). These riotous happenings overlap, time-wise, with the activities of figures like Marshall McLuhan and Umberto Eco, and give some sense of KRIWET’s important, if idiosyncratic, presence in post-war Düsseldorf. Continually interested in popular space, by the end of the decade, Kriwet took his activities to an even more public sphere, participating in the design for the legendary club, Creamcheese, the heart of artistic and radical cultural activity in Düsseldorf, directly adjacent to artist Konrad Lueg’s new Konrad Fischer Galerie.

The Cherry and Martin exhibition begins with KRIWET’s first trip to the United States, where KRIWET completed his monumental Mixed Media Project about the Apollo flight to the moon (1969), which consists of a radio text APOLLO AMERIKA, a film APOLLOVISION and a book APOLLO AMERIKA published by Suhrkamp. The film version was shown nationwide on German television that same year. This project reflects KRIWET’s deep interest in concrete poetry and his sense that the modern media landscape - experienced by the ordinary individual organically and through a range of mass communications — is a continuous text without a real beginning or end. Describing the piece, KRIWET writes at the time:

“To realize my radio text I went to a Düsseldorf travel agent and bought two plane tickets from Düsseldorf to New York. I flew to New York with an assistant and three stereo reporter tape recorders. I rented a room there at the FIFTH AVENUE HOTEL. Twenty-Four Fifth Avenue New York, N.Y. 10011 (rents payable in advance)...On 21 July 1969, the American Astronauts Edwin Aldrin, Neil Armstrong and Michael Collins orbited the moon as the first people-like-you-and-me with their ‘Apollo 11’ spacecraft, landed on it with the lunar module or spider, and then returned from there back to the ‘good earth.’ The theme of my audio text is the electronic publication of this project with telecommunications media, and not the project itself in its technical and scientific aspects and details.” (KRIWET, 1969).

In 1972, KRIWET came back to the United States to examine the 1972 primary season. The resulting work, Campaign (1972-73/2005), records a remarkable cross-section of Americans — Shirley Chisholm, Patsy Mink, Hubert Humphrey, Eugene McCarthy, George Wallace and others — battling in one of the Democratic party’s most bitter primaries. George McGovern, who ultimately won the nomination, then lost to Richard Nixon, who had just recently invaded Cambodia, and would soon resign as a result of the Watergate scandal. KRIWET’s work brilliantly records the visual strength of images and graphs, advertising and text, and well as the emerging ’soundbite’/‘talking head’ culture of American mass media, years before that idea had popular recognition.

KRIWET’s work was the subject of a major 2011 retrospective co-organized by Kunsthalle Düsseldorf (Düsseldorf, Germany) and Galerie Im Taxispalais (Innsbruck, Austria). Other recent solo exhibitions include Fri-Art (2014, Fribourg, Switzerland); Museum Ludwig Department of Prints and Graphics (2011, Cologne); The Modern Institute (2008, Glasgow); and BQ (2013, 2010, 2008, 2004, Berlin). Cherry and Martin’s exhibition reprises some aspects of KRIWET’s first solo exhibition in the US, curated by Astrid Wege in 2010 at the Goethe-Institut’s Ludlow 38 “Kunstverein” space in New York. KRIWET is represented by BQ. He lives and works in Dresden.
www.cherryandmartin.com