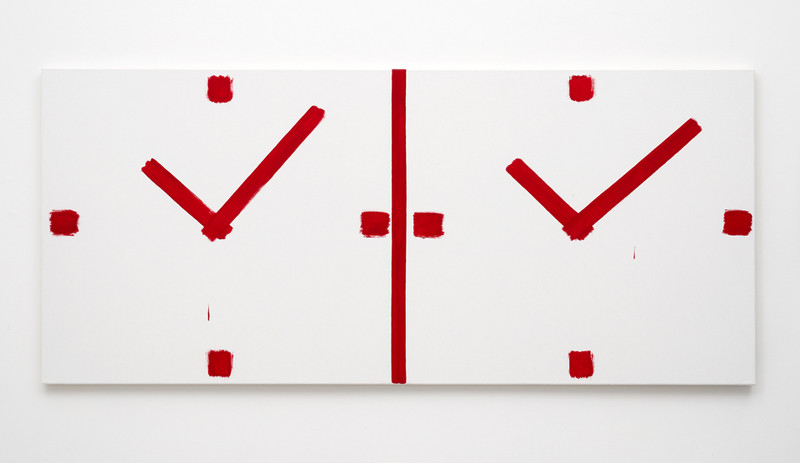 The title of the exhibition, Moving Pictures, refers to the emotional power paintings have on us. At the same time, it refers to the frame-by-frame action of the cinema, the structure of which has long interested Piffaretti, who sees it as a kind of parallel to his own work. Finally, it refers to the duplication of the motif in Piffaretti’s paintings, the movement of the image from one side of the canvas to the other.

Since the early 80s, Piffaretti has begun his paintings with a deliberate first mark - a single painted line that divides the two vertical halves of each work. Matt Connors has described Piffaretti’s first painted line as “a sort of question,” rather than a defining line, a statement, or a figure in space. FRAC Franche-Comté curator Sylvia Zavatta, who organized Piffaretti’s current show at that institution, Fair Return (of things and words), writes that, for Piffaretti, that first line opens up, “the distance he needs to concentrate on his real purpose: painting itself.”

In Piffaretti’s work, duplication is a question, and in some sense it is a negation. But it is not a negation fraught with heroic pathos. And it is not a copy. Piffaretti writes that, “a copy is made in relation to a final state.” Duplication is a postponement - a break in the action that allows the viewer to see both sides of the canvas. An uncanny pattern emerges in Bernard Piffaretti’s paintings as Arielle Blair has written, “the eye wanders back and forth attempting to unlock the puzzle of the self-contained meme and decode the artist’s experiments in variation.” “The principle rule of dividing the canvas,” provides “a platform while functioning as an anchoring device of each painting.” “Piffaretti’s duplicated paintings are neither exact copies of one another, nor are they independent images.” They “make us do a double take, defying the stagnancy of certain abstract painting.”