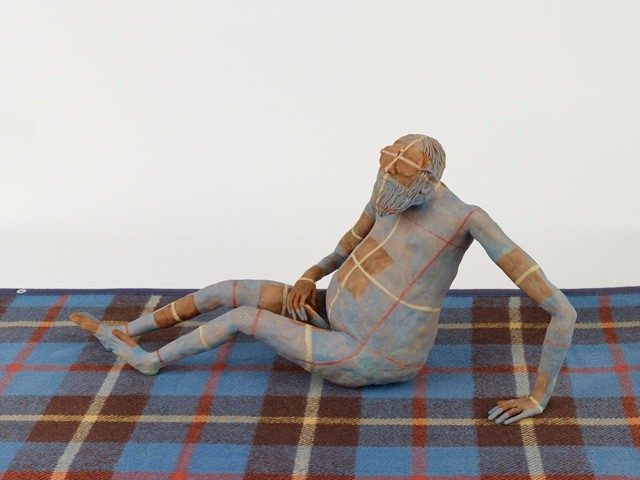 Taken from the title of Nigerian author Amos Tutuola’s 1954 novel My Life in the Bush of Ghosts, a surreal tale of the fate of mortals who stray into the world of ghosts as told from the point of view of a five year old boy, this group exhibition links three contemporary artists whose works conflate personal, visionary and mythic storytelling. Like the book, which has a hallucinogenic, broken narrative of eerie poeticism, the paintings and sculptures by Nathan Mabry, Djordje Ozbolt and Francis Upritchard, slither towards primal, transcendent legends and auspicious provocations.

Nathan Mabry draws inspiration from a variety of sources including archaeology, Dadaism, surrealism and minimalism. He purposefully embraces different stylistic associations and makes references across the art historical timeline; in his own words, he “crashes” multiple aesthetics together. Mabry will present a new Process Art sculpture combining a ready-made, bronze, faux-Remington The Mountain Man with an altered Halloween mask, cast in bronze.

Djordje Ozbolt is also an artist that works with a range of sources and starting points for his paintings and sculptures. Self-described as having a “restless” artistic process, Ozbolt’s work is simultaneously dark and humorous, reverent and charged. Paintings for this exhibition include such vibrant works as the tondo Don't Look Back (George Washington) (2009),a Cheshire Cat-esque portrait of Washington, faintly fully rendered yet with floating eyes and a toothy grin.

Francis Upritchard employs carefully handcrafted sculptures and found objects to create tableaux with open yet suggestive narrative. The Horse (2010) is a sculpture of a painted plaid man, naked except for his camouflage that matches the fabric on which he sits, placed on a found gymnastic horse. At once complex in meaning and playful through scale and color, Upritchard’s practice allows for provocative and unexpected objects to mingle within archetypical stories that range from the humorous to the historical to the mystical.

Biographies:
Nathan Mabry (b. 1977, USA) has appeared in exhibitions at the Hammer Museum, Los Angeles; the Museum of Contemporary Art San Diego, La Jolla; the Parrish Art Museum, South Hampton, NY; and the 176 Zabludowicz Collection, London. Mabry is currently featured in two group exhibitions: American Exuberance at the Rubell Family Collection in Miami and Sympathy for the Devil at the Vanhaerents Art Collection in Brussels. He lives and works in Los Angeles.

Djordje Ozbolt (b. 1967, Yugoslavia) has had recent solo exhibitions at Taro Nasu, Tokyo; Herald St., London; Galerie Rudiger Schottle, Munich; Hauser & Wirth, Zurich and 303, New York. His work has been reviewed in Frankfurter Allgemeine Sonntagzeitung, in: Numero, Artforum and The Times, London. He lives and works in London.

Francis Upritchard (b. 1976, New Zealand) has two solo museum exhibitions this year one at Nottingham Contemporary and A Long Wait at the Center for Contemporary Art, Cincinnati. Other recent solo shows include Kate MacGarry, London; Amersfoort Kunsthal, The Netherlands and Ivan Anthony, Auckland. In 2009, she represented New Zealand at the 53rd Venice Biennale. Her work has appeared in such publications as Artforum, Frieze and Modern Painters. She lives and works in London.
www.cherryandmartin.com