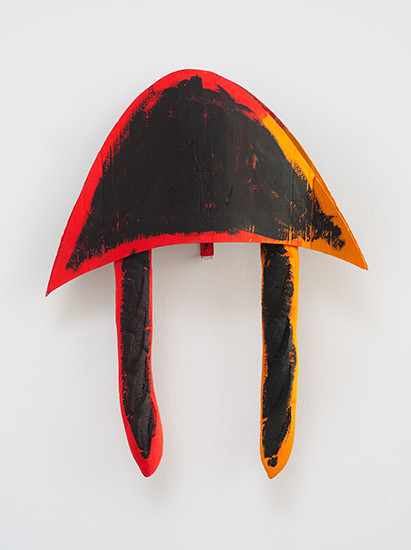 Florian Morlat's first solo exhibition at Cherry and Martin includes works made from materials like cardboard, paint, plaster and wood. It also features a selection of new cast and painted aluminum pieces. This is a new direction for the artist. Morlat has long incorporated everyday materials into his sculptures and wall works. In his first exhibition at Cherry and Martin, he goes even further, adding organic materials like straw, French bread, and bananas.

Morlat was born in Munich. The physical components of his work recall his roots in a German-language post-war artistic tradition. At the same time, Morlat's visual pursuits, particularly with regard to shape, suggest an aesthetic born of 1960s California pop culture—he's lived in the state almost 20 years—and a familiarity with American modernist icons. In Morlat's work we sense the rawness of Franz West, the freedom of Alexander Calder, the poetry of David Smith. Morlat's pieces are subjective, stylized representations of people and things; at the same time, they are objective investigations into form and mass, color and, especially, shape. The tension of an encounter with the 'one-sideness' of Morlat's pieces is only resolved through circumnavigating them and getting a sense of their totality from all sides.