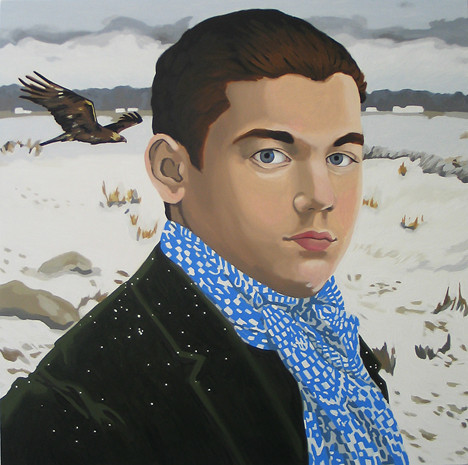 Holly Coulis’ paintings tap into one of our most fundamental and complex human desires — the urge to depict our fellows. Her invented cast of characters frame a wandering imagination and an impulse to connect and empathize with even fictional persons. Coulis presents people as raw individuals filled with the possibility of their own character and personal stories. She playfully inserts her subjects into the history of portraiture, where they affirm and expand modes of tradition with eloquence and subtlety.
Holly Coulis' second exhibition at Cherry and Martin consists entirely of pictures of men. Average men, albeit eccentric, some clothed, some nude, engaged in a variety of activities; bathing, relaxing, or watching the birds and the world pass by. As a female artist picturing men, Coulis’ paintings are not political per se; rather they present a shift in the focus from what has come to be an expected relationship. Coulis uses this investigation to imagine her subject’s inner life, exploring the intersection of masculinity and vulnerability. In doing so, she engages in a dialogue with such painters as David Hockney, Alice Neel and Sylvia Sleigh, all of whom used portraiture as a way of investigating intimacy, subjecthood and self-identity. Coulis’ characters fall outside of the pale of classical portraiture and history painting, creating a mythology of simple stories and lives. The implied and imagined histories held in their poses, faces, dress and environments highlight Coulis’ sense of the celebratory and the tragic.
Holly Coulis received her BFA from the Ontario College of Art and Design and her MFA from the Boston Museum School. Her work has been featured in numerous exhibitions, including NeoIntegrity, curated by Keith Mayerson at Derek Eller Gallery, She’s Come Undone at Artemis Greenberg Van Doren and Marilyn at Sean Kelly Gallery. She has had solo exhibitions at Groeflin Maag Galerie (Zurich, Switzerland), Lamontagne Gallery (Boston) and Zach Feuer/LFL Gallery (New York City).
www.cherryandmartin.com