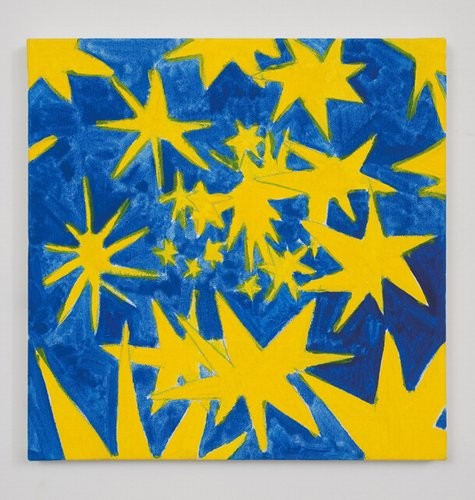 Matt Connors’ works examine a range of non-mimetic signs including touch, frame and surface, while flirting with representing possibilities of a number of different emblems, including letter and number forms, stars and pennants. Some of these emblems are gleaned from everyday usage and seem oddly familiar. Some of them are mysterious and open the door to the possibility of private meanings. Exploring the idiosyncrasies of personal vision while directing the viewer in a loose, yet insistent way, Connors’ paintings elicit an emotional and visceral response while at the same time allowing for a range of intellectual questions. It has been suggested that Connors’ pictures are not so much abstract paintings as paintings of abstract paintings. In some sense this is true, yet, at the same time, Connors' paintings have a not-to-be overlooked handmade aspect that thoroughly grounds viewer and object in their own space.

There is a found object quality to Matt Connors’ practice that draws not only on the world around us, but also on histories and practices of painting. For example, Backgammon (2009), combines a stretcher, a roll of found material and a hand-brushed application of Gesso. Gesso is, of course, a store-bought undercoat typically used to start not finish a canvas. The result here is an enigmatic, seemingly grid-dependent monochrome that straddles painting as an immediate and a historical moment.

Also included in the exhibition will be one of Connors’ new frottage pictures. The nature of frottage implies that studio practice is a kind of loop that both reaches out at the world and looks back upon itself. The exhibition title, Dromedary Resting, also suggests that refraction and illusion, happy accidents and purposeful incommensurabilities are as much a fact of art making as our experience of it.

Matt Connors will participate in upcoming solo exhibitions at Galerie Martin Janda (Vienna) and CANADA (New York). Connors’s paintings were included in Matt Connors, Arturo Herrera and Merlin James at Sikkema Jenkins (New York) and he has had recent solo exhibitions at Lüttgenmeijer (Berlin) and The Breeder (Athens). Connors received his BFA from Bennington College in 1995 and his MFA from Yale University in 2006. He lives and works in Los Angeles.
www.cherryandmartin.com