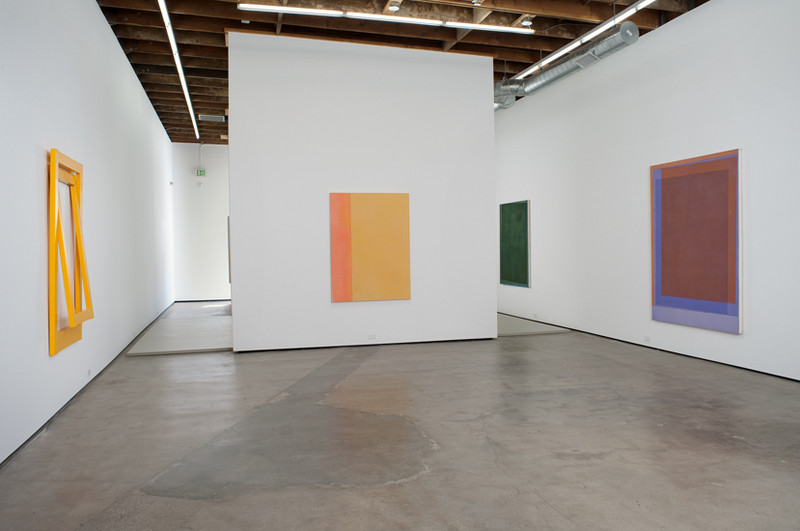 Matt Connors’ open-ended approach to art-making embraces movement, change and meaning. Touching and jostling, his paintings and objects are intellectual and emotional, literal and metaphorical; they give a sense of themselves as being both pictures and things. Many of Connors’ works invoke physical methods like dripping, rubbing and staining. Museum of Modern Art curator Peter Eleey writes that Connors’ paintings are “remarkable for the apparent thinness of their surface; paint ends up in them, rather than on them.”

Eleey goes on to say he sees Connors engaging “freely with the histories of his medium without depending upon them.” The title for Connors’ upcoming exhibition at Cherry and Martin, “Sandpaper Sleeve,” suggests Connors’ perspective on histories and references. Referring to an album by Durutti Column, it suggests a conceptual and also practical intersection between the currents at play in art and design, music and performance. In choosing this phrase, Connors reveals movement within painterly ‘stillness.’ He invokes the fleeting moment of connection between maker, viewer and art object, that, if handled correctly, leaves a lasting impression.

Matt Connors’ work will be the subject of “Impressionism,” a solo exhibition at MOMA PS1 in October 2012. Recent solo and two-person museum exhibitions include “Gas... Telephone... One Hundred Thousand Rubles,” Kunsthalle Düsseldorf (Düsseldorf, Germany), and “Concentrations 54: Matt Connors and Fergus Feehily,” Dallas Museum of Art (Dallas, TX). Connors will be included in the upcoming exhibition, “Painter, Painter” at the Walker Art Center (Minneapolis, MN). In 2012, Matt Connors received the John Simon Guggenheim Memorial Foundation Fellowship Grant and the Belgacom Art Prize. Born in 1973, he received his BFA in 1995 from Bennington College (Bennington, VT) and his MFA in 2006 from Yale University School of Art (New Haven, CT). Connors grew up in San Diego; he lives and works in New York.
www.cherryandmartin.com