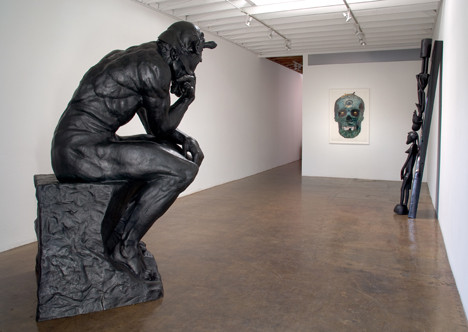 Cherry and Martin presents the highly-anticipated second solo exhibition of new bronze sculptures and works on paper by Nathan Mabry.
The exhibition opens at Cherry and Martin on March 1, 2008 and runs through April 5, 2008.
The opening reception is Saturday, March 1 2008 from 6-8pm.
Nathan Mabry’s work is the result of careful attention paid to the surprising commonalities and odd idiosyncrasies he activates in a range of divergent cultural material. Pulling forms and ideas from such sources as traditional African art, ancient Peruvian ceramics and American Minimalism, Mabry makes photographs, sculptures and works on paper that are more than just the sum of their parts. Mabry's works move easily between conceptualism and irreverence, bawdy humor and formal conceit, creating a gestalt experience that constantly upends and repositions the viewer's focus, informing both the objects Mabry creates and their relation to art history.
Nathan Mabry's exhibition at Cherry and Martin will include new bronze sculptures in which figures derived from Pre-Columbian Moche ceramics surmount stools based on Donald Judd's furniture-making practice. The figures make the 'in-and-out' sign with their fingers, a waggish gesture signifying sexual intercourse that in this work serves in part to align the repetition of sex with the repetition of Minimalism's own raw gestures. Also in the exhibition will be a new large-scale drawing on Mylar with colored pencil and Swarovski crystals. A work in Mabry's Mosaic Skull series, the drawing conjoins the ancient bling of Mexican Mixtec culture from the time of the Spanish conquest with the iconic tooth jewelry of modern hip-hop: the grill.
Nathan Mabry received a BFA from the Kansas City Art Institute and a MFA from the University of California, Los Angeles. Mabry will be featured in upcoming exhibitions at ZERO in Milan, Italy and Apocalypse Yesterday curated by David Pagel at the Claremont Graduate University galleries in Claremont, CA. His work has been featured in Red Eye: Los Angeles Artists from the Rubell Family Collection at the Rubell Family Collection, Miami, FL and Thing: New Sculpture from Los Angeles at the Hammer Museum, Los Angeles, CA. He will be featured in the March issue of Art & Auction with an “In The Studio” interview with Jori Finkel.
www.cherryandmartin.com