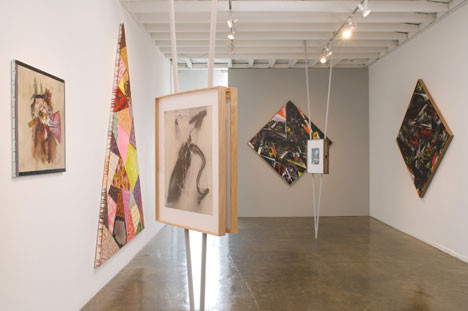 Cherry and Martin brings together nine different artists whose work in various media relates in some sense to that made in the early decades of the twentieth century. The exhibition, Radiant City, addresses one of the most important questions confronted by any artist: their attitude towards the past.
The opening reception is Saturday, June 30, 2007 from 6-9pm.
In his groundbreaking 1973 book, Anxiety of Influence, Harold Bloom describes the relationship between young poets and their predecessors. Young poets may be inspired by the works of their better-known predecessors, Bloom notes, but in order to be strong and not derivative, they must be willing to creatively misinterpret their gods.
For young artists today, creative misinterpretation entails asking a number of questions. Not just what an interesting statement is given the weight of art history, but also what an interesting statement is given the contemporary artworld’s obsession with the new. In regard to turn-of-the-century Modernism and today’s art practice, we must ask if early Modernism constitutes a formal and political language, if it can be used to describe contemporary problems and if there is room for today’s artists to step in where past masters left off. Resemblance, which would seem to be a relatively straightforward relation, is revealed by many of the artists in this show to be something quite a bit more complicated.
The early decades of the twentieth century introduced many currents that continue to figure contemporary art making today. The period’s social ferment, formal breakthroughs and the questioning of the art object were introduced in the midst of a wildly diverse cultural climate, resulting in a myriad of new directions for art practice. As this exhibition points out, there are a number of artists working today who are reaching past the stylization that marks the end of Modernism back towards the unruly early decades of the twentieth century—back towards a historically more distant, seemingly didactically more canonized time. To some degree this move grows out of the formal and political commonalities shared by the 1920’s and the 1960's, with the exploration of the end of Modernism leading back to a contemplation of its roots. At the same time, many aspects of the interest in the art of the early decades of the twentieth century demonstrated by the artists in this show are an entirely new development. Until quite recently early Modernism was considered established history, a strictly no-go area for artists with new ideas. The artists in Radiant City approach the past with few caveats about what they can or cannot do as art makers: the various stylistic isms of the period emerge as but tools in the toolbox; irony is less of a foregrounded given; and creative misinterpretation is rampant.
www.cherryandmartin.com