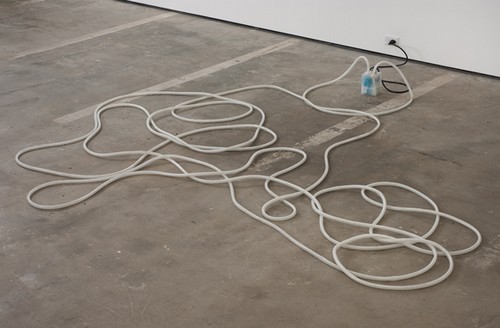 BRIAN BRESS has exhibited recently in Video Art; Replay, Institute of Contemporary Art (Philadelphia); "Now that I'm by myself," she says, "I'm not by myself, which is good" DiverseWorks (Houston) and Against The Grain, Los Angeles Contemporary Exhibitions (Los Angeles). His video Under Cover (2007) was included in the 2008 survey exhibition and catalog California Video: Artists and Histories at the Getty Museum, Los Angeles. He received an MFA from the University of California, Los Angeles and BFA from Rhode Island School of Design. Cherry and Martin will present a new video by Bress at this year’s Art Basel Miami Beach.

MATT CONNORS recently completed a residency and solo exhibition at Krabbesholm, Denmark this summer. Connors’s paintings were included in Matt Connors, Arturo Herrera and Merlin James at Sikkema Jenkins (New York) and he has had recent solo exhibitions at Cherry and Martin (Los Angeles), Lüttgenmeijer (Berlin) and The Breeder (Athens). He received an MFA from Yale University and BFA from Bennington College. Connors will have an upcoming solo exhibition at CANADA (New York) and a three-person show at Nicole Klagsbrun (New York) in 2011.

MARI EASTMAN has had solo exhibitons at such galleries as Sies + Hoke (Dusseldorf), Emily Tsingou (London), Karen Lovegrove (Los Angeles) and Spruth Magers (Munich). Recent group exhibitions include An Expanded Field of Possibilities, Contemporary Arts Forum (Santa Barbara); Idle Youth, Barbara Gladstone Gallery,(New York) and Hunters and Devils, Andreas Grimm, (Munich). She received an MFA from the School of The Art Institute of Chicago and BA from Smith College. She will be included in the 2010 California Biennial at the Orange County Museum of Art and have her first solo exhibition at Cherry and Martin in April 2011.

PETER HARKAWIK's work has been shown in New York, Los Angeles, and Paris and this summer was the subject of a two-person exhibition at Night Gallery (Los Angeles). He recently moderated a panel that addressed the relevancy of typisierung on contemporary visual practice titled The Type at Andrea Rosen Gallery (New York). He holds a BA in Critical Theory from Hampshire College.

NICK HERMAN is an artist, writer and publisher of ANTEPROJECTS. He has exhibited at The Sculpture Center, Socrates Sculpture Park and Peter Blum Gallery in New York. His work was recently a part of Portugal Arte (Lisbon) and he will have a solo project at LA><ART in January 2011. He has an MFA in sculpture from Yale University and a BA in religious studies from Macalester College. Herman will be a 2011 artist-in-residence at The Chinati Foundation in Marfa (Texas).

ALEX KLEIN’s work and writing have been exhibited and published both nationally and internationally. She recently edited the essay collection Words Without Pictures (LACMA / Aperture, 2010) and is a co-founder of the independent publishing imprint Oslo Editions. She received an MFA from the University of California, Los Angeles, an MA in the History of Art from the Courtauld Institute of Art and BA from Columbia University.

NATHAN MABRY's recent exhibitions have included Portugal Arte, (Lisbon); Underground Pop, Parrish Art Museum, (Southampton, NY);The Library of Babel / In and Out of Place, 176 (London);Second Nature: The Valentine-Adelson Collection at The Hammer, Hammer Museum (Los Angeles) and Weighing and Wanting: 25 Years of Collecting, Museum of Contemporary Art San Diego, (San Diego). Mabry received an MFA from the University of California, Los Angeles and BFA from the Kansas City Art Institute. He has upcoming solo exhibitions with Praz-Delavallade (Paris) in November and at Cherry and Martin in January 2011.
www.cherryandmartin.com