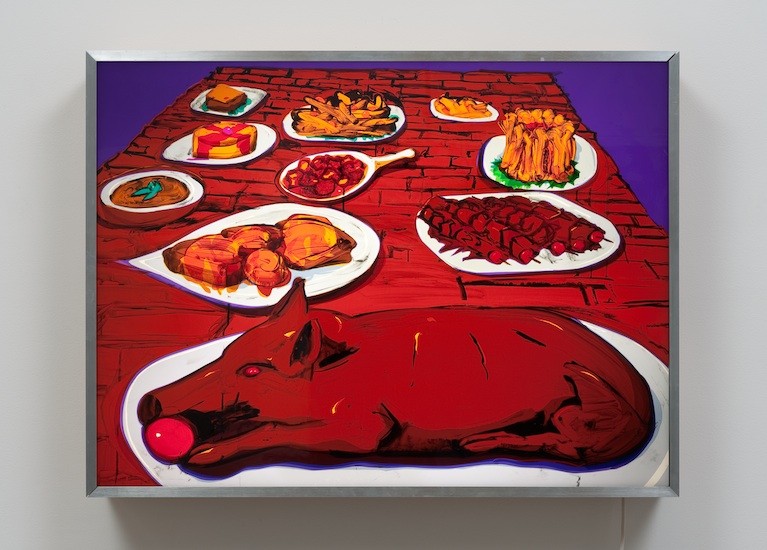 T. Kelly Mason has been a major force in Los Angeles for more than two decades. In 1994, his work was included in the important and controversial exhibition, "Pure Beauty: Some Recent Work From Los Angeles," curated by now-Stedelijk Museum director Ann Goldstein at the Museum of Contemporary Art in Los Angeles. Goldstein’s landmark show was the first of young artists’ work at the museum. The remarkable group she selected came to represent a new generation—the leading voices of a vanguard mentored by Mike Kelley, Stephen Prina and Christopher Williams.

T. Kelly Mason's videos, light boxes, sculptures and installations address space and structure as both object and idea. Mason's longstanding interest in the ideological coding of space plays off the experiential and direct currents that appear in his art. Masons's past works and texts cite Foucault, Piaget, Athusser, Deleuze and Guatari; in this exhibition, a traditional expressive vehicle (painting) finds an analog in a series of colored light boxes, such as "Typology of Glasses" (2013). Mason's light boxes use lighting gels and hand drawn shapes to represent domestic scenes of pleasure and consumption. Glowing images of fancy cocktail drinks, designer lamps and tables serve as a jumping off point for Mason's own version of 'abstraction.'

Also included is Mason's video work, "The Imp of the Perverse" (1992-2011). Last seen in Lars Nittve's ground-breaking 1997 Louisiana Museum of Art exhibition, "Sunshine and Noir. Art in Los Angeles 1960-1997." Mason's "The Imp of the Perverse" is a slow moving presentation of the artist as both everyman and flaneur. Sublime desert landscapes -- Arches, Bryce Canyon, Zion, Death Valley - provide a visual counterpoint for Poe’s text, which is read by Mason both in situ and in voiceover. An exploration of the mental state of The Romantic, this philosophical and visual essay rapidly transforms into a tale of murder, guilty conscience and flight.

Mason's "Scrubbies" are sound sculptures made from architecturally organized pot scrubbers. They enlist the subjective experience of the individual observer: each "Scrubby" contains an intense, repetitive and humorous sound component, inverting our expectations about space and our relation to it. As Pinakothek Der Moderne curator Bernhart Schwenk comments, this is a theme Mason returns to again and again. Mason's work is a metaphor "for our inability to ever comprehend reality and truth comprehensively," a reflection on space and structure, as it exists, as we relate to it, as culture has shaped it to suit our needs and uses.